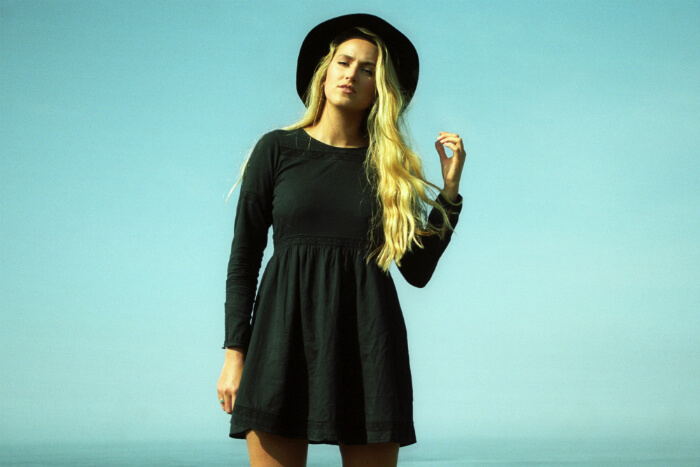 Frankie Davies has announced her debut album will be released in November and she is celebrating by holding an album launch show at Gullivers in Manchester.

“Wherever I Go is me, encapsulated,” says Frankie Davies, Jersey-born songwriter, on her highly anticipated debut album.  “This represents me, my journey and experiences over the last 4 years” she explains.

Wherever I Go features lead single High On Love which she describes as an unusual take on a love story.  “[It’s] one that follows an optimist with the ability to conjure up a connection that wasn’t there in the first place. By misreading gestures of kindness for ones of affection, we see just how easy it is to run away with our ideas of love. Being high on that ideal blurs the lines of what is real and masks the truth.”

Frankie Davies’ debut album Wherever I Go is the follow up to 2015’s standout debut EP Dancing All Night which spawned three singles and a whole heap of praise and airplay.  She started working on the album in 2017, recording with Nashville musicians and back in the UK with her band.

“In one sense this album is a showcase of lessons learnt from my beginnings and being young and naive in the music industry. From the rockier, You Don’t Know Me, written with Emily Linden, where I let my frustration pour out, to the contrasting Front Row Seat. The latter song is about an experience that broke me. I had been led to believe that a show I had been booked for would suddenly change my life. When it came to showtime there was only one person in the audience. I went out and I played and from my disappointment, I discovered something truly valuable. Even if there is only one person to listen to my music they deserve my best performance. I am always grateful to anyone who wants to listen” she says about the album.

When does Frankie Davies headline at Gullivers?

Frankie Davies headlines at Gullivers, Manchester, on 11 November 2018.  Wherever I Go is due for release on 26 October 2018.