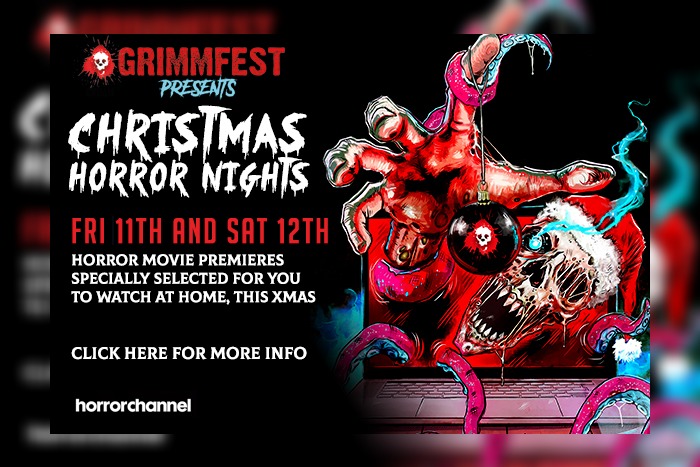 The team over at Manchester’s Grimmfest are presenting two nights of festive frights, seasonal shockers and mean-spiritedness delivered into your homes.

On Friday 11 December, Grimmfest favourite Lora Burke is a nurse forced to abandon her Hippocratic Oath in a brutal, bloody battle for survival, in Gabriel Carrer and Reese Eveneshen’s ferocious For The Sake of Vicious.

Also screening that night is Jennifer Sheridan’s emotionally harrowing Rose, where love means never having to say you’re sorry, no matter how far you go to preserve it, as real-life couple Sophie Rundle and Matt Stokoe put everything on the line.

In support of the two movies will be a series of shocking shorts addressing family-focused fears and domestic dread including US where a father struggles with his own infection and his duty to protect his daughter from harm in the middle of a pandemic; Garreth Carter and WIll Douglas’s The Farmhouse where a teenage girl longs to escape from the isolation of rural England only to realise how trapped she really is; Incubus as a young woman is disturbed in the middle of the night by her boyfriend’s return from the pub and her suspicion that he is not alone; a man is haunted by spectres of his own guilt in Martin Thomas’s oneiric The Shallows; A woman confronts her worst nightmare, in Ryan Harr and Jacquelyn Ferguson’s nerve-jangling Reflect; and a young carer starts to feel increasingly under threat in her patient’s home in Damien Fannon’s subtly creepy and claustrophobic The Keeper.

Maximiliano Contenti’s retro-styled slasher Red Screening will also screen to offer a reminder of what we are all missing – a night out at the cinema with popcorn, overpriced drinks and the possibility of being stabbed through the head by a violent lunatic.

The evening will also feature a series of shorts including Ben and Jacob Burghart’s Suspense where an army pilot survives a plan crash only to realise he’s leapt from the frying pan in to the fire; Like Me Deadly featuring a young social media influencer taking increasingly extreme risks to win more followers; A young man receives an unexpectedly troubling birthday present from his fiance in Dinh Thai’s darkly comic Make A Wish; and a young girl has a very bad day at school, in Here There Be Tygers.

More information about Grimmfest’s Christmas Horror Nights is available on the Grimmfest website.