Grimmfest to celebrate the history of horror cinema 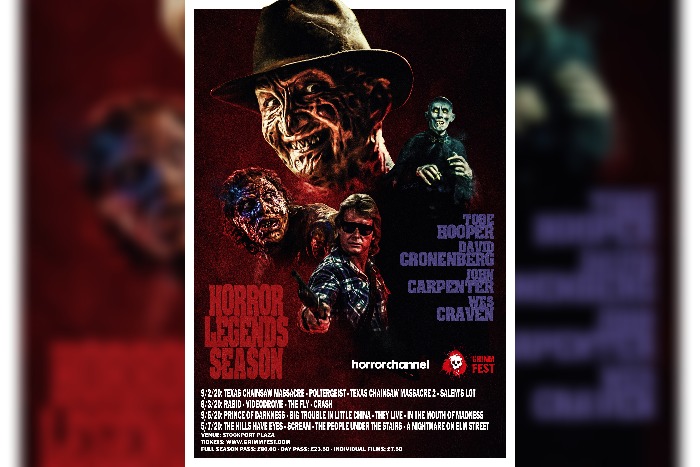 Grimmfest, one of the UK’s biggest horror cinema specialists, will celebrate the history of horror cinema with a series of events.

Grimmfest have teamed up with the UK Horror Channel to offer big screen presentations of a host of classic horror films from four of the genre’s masters.

In the setting of Stockport Plaza, Grimmfest will present classic horror movies from the directors Tobe Hooper, David Cronenberg, John Carpenter and Wes Craven.  They will screen 16 movies across 4 special day events.

Described as “an exercise in the pornography of terror” by James Ferman, former head of the BBFC, it was recently added to the permanent collection of the Museum of Modern Art in 1981.

“They’re heeeeerrrre!” Spielberg tries his hand at horror, but is smart enough to enlist Hooper to direct.

Leatherface is back. And this time he’s got Dennis Hopper to answer to.

“Everybody’s a mad scientist, and life is their lab. We’re all trying to experiment to find a way to live, to solve problems, to fend off madness and chaos.” – David Cronenberg.

In the wake of the Soska Twins’ recent remake, a chance to revisit the stark, bleak original; the film in which Marilyn Chambers truly is insatiable.

“Long live the new flesh!” Remember the whole “video nasties” hysteria of the 1980s? Fear of what exposure to such things might be doing to the young? It could have been a lot worse.

“There was an old lady who swallowed a fly. I don’t know why. Perhaps she’ll die…” One of the genre’s greatest ever love stories. Yes, seriously.

Cronenberg’s cinematic reimagining of J.G Ballard’s novel was described as “beyond the bounds of depravity” by critic Alexander Walker. The perfect combination of filmmaker and source material, in other words.

“In France, I’m an auteur, in Germany a filmmaker, in England a genre film director, in the USA a bum!” – John Carpenter.

Every 70s martial arts movie you ever loved put into a blender, and then thrown at Kurt Russell. Who comes out fighting.

Rowdy Roddy Piper is all out of chewing gum. Those alien invaders had better watch out. The perfect combination of poltical satire and all-in wrestling.

IN THE MOUTH OF MADNESS 15 Cert

“God’s not supposed to be a hack horror writer.” But let’s face it, that would actually explain a lot…

THE HILLS HAVE EYES 18 Cert

Family values in conflict; a stark and brutal confrontation between civilisation and savagery in which the lines between the two become increasingly blurred.

What happens when the killers don’t play by The Rules any more?

THE PEOPLE UNDER THE STAIRS 15 Cert

A NIGHTMARE ON ELM STREET 18 Cert

One, two, Freddy’s coming for you……