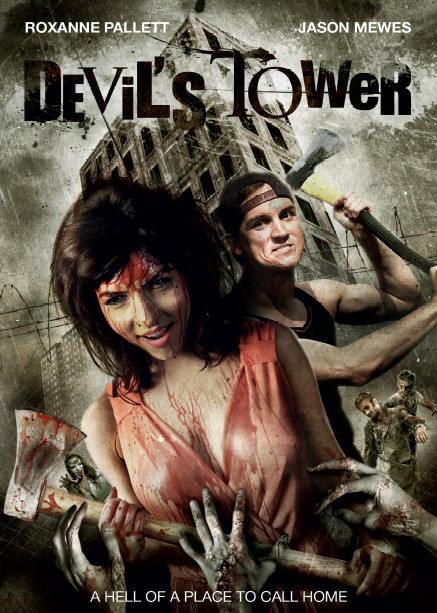 The movie, which also stars Jason Mewes (Jay and Silent Bob Strike Back) forms a part of the lead-up to Grimmfest which is set to take place from 2nd – 5th October.  As part of the lead-up, this World Premiere will be accompanied by a selection of the best new Horror Shorts (including Don’t Move, kickstarter funded Dan Of The Dead and Till Death) and will also see Grimmfest prizes up for grabs.

Devil’s Tower itself (rated 18), filmed in Derbyshire, sees Sarah (Roxanne Pallett) move into the sort of apartment block you wouldn’t really choose to do so if you had any choice whatsoever – in this case she has been thrown out of her home by her abusive mother.  Once in she befriends squatter Sid (Jason Mewes) and teams up with him to find his missing friend – only to uncover strange deaths and disappearances and discover the secret of a vengeful ghost possessing a hoard of zombies.  This truly is a tower block where people tend to die or be committed.

The movie has been directed by Owen Tooth in his first full length feature film, having cut his teeth (sorry!) with an impressive array of video shorts and cinematographic work.

A mixture of horror, comedy and drama, Devil’s Tower has earned praise for the excellent performances of the carefully put together cast which also includes Frances Rufelle as Sarah’s slightly crazy mother, an excellent turn from Jessica-Jane Stafford (formerly known as Jessica-Jane Clement, dubbed the sexy swindler in The Real Hustle) and a typically strong showing from Eddie Webber (The Firm).

In addition to the movie itself, the event will also feature the writer, director, producers and some cast members appearing for a Q&A session.

Tickets for Devil’s Tower World Premiere at The Dancehouse on Wednesday 10th September (doors at 7.30pm, film at 8pm) are on sale now.

In Review: The Courtesans