Grimmfest announce 2019 awards jury and details of prizes and sponsors 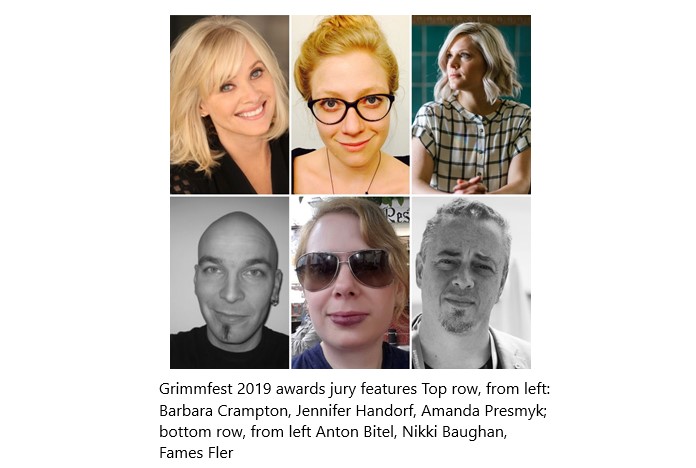 Grimmfest will return in 2019 and the Manchester based independent genre festival will again be hosting an awards scheme featuring prizes worth more than £120,000 across 13 special awards.

The hugely successful Manchester film festival has revealed details of the awards jury for 2019, chaired by actress, producer, horror movie icon and 2018 Lifetime Achievement award-winner Barbara Crampton, renowned for her roles in Re-Animator and You’re Next.

Barbara will be joined by five other carefully-selected figures from the world of genre cinema, including Jennifer Handorf (film producer with credits including Prevenge, The Chamber, The Borderlands, The Forgotten and The Devil’s Business), Amanda Presmyk (film producer for Fangoria and Cinestate, with credits including Dragged Across Concrete, Puppet Master: The Littlest Reich and Satanic Panic), Anton Bitel (film critic for publications including Sight & Sound, Little White Lies and Scifinow), Nikki Baughan (film critic for publications including Screen International, Sight & Sound and The List) and James Fler (sales agent for Raven Banner Entertainment, whose titles include Tigers Are Not Afraid, Lifechanger and Trench 11).

The 2019 awards categories are:

1. BEST FEATURE FILM and
2. BEST DIRECTOR
Both awards sponsored by film financier and producer Michael Laundon, with a prize of £40,000s worth of post-production funding to be awarded to each winning filmmaker for a future feature production (subject to terms and conditions).
3. BEST SHORT FILM
Sponsored by video-on-demand platform Shudder, who are offering an airing of the winning film on their channel.
4. BEST SCREENPLAY
Sponsored by leading screenwriting software company Final Draft, with a free copy of the latest version of the software offered for the winner. Also sponsored by Inktip who are offering the winner a free screenplay listing on their website.
5. BEST CINEMATOGRAPHY
Sponsored by UK-based post-production house One Bright Dot, who are offering 10 days’ grade/online plus 10 days’ VFX and picture deliverables, for a total value of £20,000’s worth of post-production services.
6. BEST SCORE
Sponsored by Grimm Entertainment, the feature film development and production arm of Grimmfest, who will offer the winning composer an opportunity to score one of their upcoming productions.
7. BEST ACTOR
8. BEST ACTRESS
9. BEST SFX
Sponsored by Fangoria magazine, offering online coverage of the award-winning piece of work, plus a year’s subscription to the magazine.
10. BEST KILL
Sponsored by Dread Central, who are offering online coverage of the award-winning film.
11. BEST SCARE
Sponsored by Rue Morgue magazine, who are offering an article on the award-winning film, plus a year’s subscription to the magazine.
12. BEST WORK-IN-PROGRESS
Sponsored by Michael Laundon, Film Seekers and Screen International, the winner will receive £20,000s worth of post-production funding (subject to terms and conditions), an offer of international sales representation and a year’s subscription to Screen International magazine.
13. LIFETIME ACHIEVEMENT AWARD
Sponsored by Horror Channel who will present this award to honour a very special guest on their body of work within genre cinema.
14. AUDIENCE AWARD
Sponsored by Shudder, who will award the winning filmmakers with a 12-month subscription to their video-on-demand service.

Short and feature-length film submissions are currently being accepted via FilmFreeway. The regular submissions deadline is 7 July and the late deadline is 4 August 2019. Selected films will be eligible for awards consideration

When does Grimmfest 2019 take place?