Courteeners leading huge charity gig for A Bed Every Night 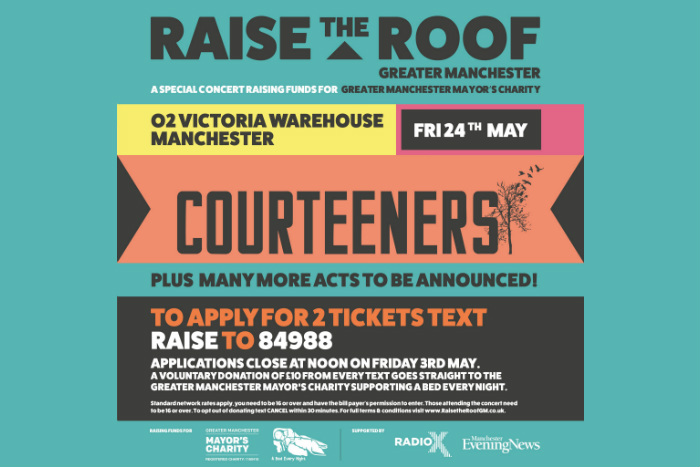 Courteeners are set to headline a special gig at Manchester’s Victoria Warehouse to raise the roof for homelessness.  The event will feature a mix of some of the biggest and most influential artists from across Greater Manchester.

The night will be headlined by Courteeners, who are joined by Blossoms, Bugzy Malone, Lisa Stansfield, Dr John Cooper Clarke and Radio X presented and DJ Sunta Templeton.

Raise the Roof takes place at the O2 Victoria Warehouse, Manchester, on 24 May 2019.  A host of other surprise guests from sport, TV and comedy are also set to take part.

Music fans are being asked to make a £10 donation to the Greater Manchester Mayor’s charity, to raise money for A Bed Every Night scheme and support people who would be otherwise sleeping rough. People need to text ‘RAISE’ to 84988, before midday on Friday May 3rd, to be in with a chance of winning a pair of tickets for the concert.

The public ballot open is now open and runs for just over three weeks. The age restriction is 16+. Anyone aged 16 or 17-years-old must be accompanied by an adult. 1,600 lucky winners – who will each receive a pair of tickets – will be contacted from Monday May 6.

Speaking about the aim of Raise the Roof, Courteeners lead singer Liam Fray commented, “Rough sleeping on the streets of Greater Manchester is a crisis all of us need to confront and by joining forces we can really make a difference.”

Meanwhile Tim Heatley, Chair of the Mayor of Greater Manchester’s Charity added, “This is a great way to donate to a fantastic charity while also being in with the chance of winning a pair of tickets to what I’m sure will be a fantastic night. A Bed Every Night is a commitment to deliver a place to sleep; plus hot food, a shower and targeted support for everyone sleeping rough in the city-region. Businesses have played a big role in organising the concert. This shows what can be achieved when the private and public sector in the region comes together.”

How do you apply for tickets for Raise the Roof at Victoria Warehouse?

To apply for two tickets text ‘RAISE’ to 84988. Applications close at noon on Friday 3rd May. A voluntary donation of £10 from every text goes straight to the Greater Manchester Mayor’s Charity supporting A Bed Every Night. Please do not apply after this time as your entry will not count but you will still be charged. Winners will be contacted from Monday 6th May and sent a redemption code for 2 free tickets to the show, you will be given 24 hours from that point to redeem your tickets. Standard network rates apply, you need to be 16 or over to enter. Entries are capped at 4 per mobile number. To opt out of donating, reply CANCEL to your entry confirmation text within 30 minutes of making your entry.