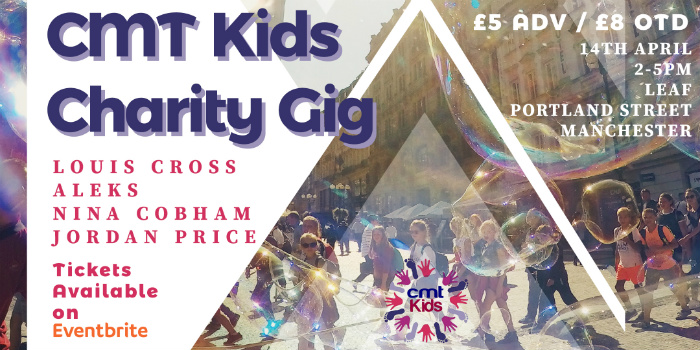 BIMM Manchester student and singer, songwriter Louis Cross is hosting a gig for the Charcot-Marie-Tooth Kids charity at Leaf.

The 18 year old from Stockport is raising funds for CMT Kids, which provides support for children with the genetic condition which damages peripheral nerves.  In the UK around 25,000 people have CMT, making it the most common neurological condition.  The nerves are responsible for passing on commands from the brain to the muscles and relaying information to the brain about sensations, pain, heat cold, touch and balance.

The charity is one which is very close to Louis’ heart, as he explains, “When I was 11 years old my condition worsened to the point where I had to use a wheelchair in high school and was in severe amounts of pain when I did walk due to the foot deformities that I developed. I then had surgery with Royal Manchester Children’s Hospital which reconstructed my foot to correct the foot deformities (along with lots of physiotherapy), and I can now walk better than I have done in almost all of my life.’

‘I then later started going to CMT Kids weekends every year at outdoor activity centres. I have never met anyone with CMT (apart from my family) until I came to the CMT Kids weekends. I also get to do many activities that I wouldn’t normally be able to do without the help of the staff at the outdoor centre we have been at: Matlock Lea, Bendrigg Trust and Calvert Trust.’

‘Due to the fact that Charcot-Marie-Tooth isn’t well known not many people raise money so that we can keep doing these trips which are incredibly important for many people. My aim is to raise £500 for CMTKids so that we have a chance of doing these lifesaving trips every year.’

The charity gig at Leaf will feature singer songwriter Louis, who performs a mixture of pop and folk, influenced by Laura Marling, Bob Dylan and Ed Sheeren.

He will be joined by Aleks, a 19 year old singer songwriter from Bulgaria who has spent the last six years living in Manchester.  Aleks is entirely self-taught, performing a mixture of RnB, pop and soul.

When is the CMT Kids charity gig at Leaf?

Louis Cross is hosting the charity gig for CMT Kids at Leaf, Portland Street, on 14 April 2019, from 2-5pm.  All performers are students from BIMM Manchester.

Booking is available via Eventbrite.