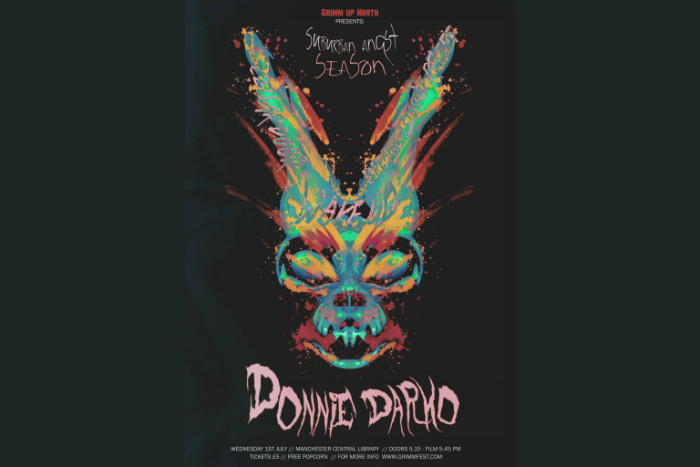 Ever feel misunderstood? Displaced in a strange suburban nightmare; a mess of unruly sexy nightclub singers, mid-life crisis parents, 6ft tall demonic bunny rabbits, severed ears and the impending end of days to deal with. Fear not, vent your Suburban Angst with Grimm Up North at Manchester Central Library this summer.

Following on from American Beauty Grimm Up North, the team behind the incredible Grimmfest who have also been putting on film screenings at Manchester’s Dancehouse Theatre, Gorilla and even Central Library, continue their season with Richard Kelly’s cult classic masterpiece Donnie Darko on 1 July.

For those who haven’t already fallen head over heels for the mind-bending allure of a darkly funny film rife with 80s dance tracks and a young disenchanted Jake Gyllenhaal – this is your chance to see the psychological thriller come Sci-fi powerhouse that’s baffled generations.

Donnie Darko sees our sleep walking hero lost in recurring visions and psychosis as he commits increasingly more violent acts at the command of his furry friend Frank in an eerie grunge- Lynch skewered suburbia.  After surviving a freak accident, Donnie begins to explore what it means to be alive, and in short order to be in love, he uncovers secrets of the universe that give him a tempting power to alter time and destiny.

Descending even further into the dark side of suburbia Grimm will be bringing you David Lynch’s Blue Velvet on the 9 July.

Blue Velvet follows Jeffrey Beaumont who upon returning home to visit his father in intensive care at the hospital, finds a human ear in a field.  When the police are unable to investigate, Jeffrey takes matters into his own hands; marking his descent into a dark underworld existing just beneath the surface of an apparently idyllic suburbia.  Jeffrey becomes suspicious yet obsessed with nightclub singer and iconic beauty Dorothy Vallens (Isabella Rosselini), who’s controlled by a violent, evil and sexually disturbed man, Frank Booth.

Written and Directed by the legendary auteur David Lynch and starring Kyle Mclachlan (Twin Peaks), Laura Dern (Jurassic Park) and Dennis Hopper (Easy Rider); the chance to see this twisted classic on the big screen is not to be missed!

In Interview: Jessica Jane Stafford
Roger Moore to appear in conversation at Manchester Opera House
In Interview: The Courtesans