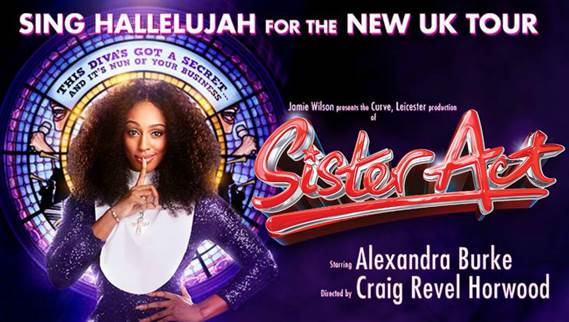 The full cast has now been revealed for the new production of the Broadway and West End smash hit Sister Act, directed by Craig Revel Horwood and starring Alexandra Burke who last appeared at The Palace in the recent production of The Bodyguard.

Based on the smash hit movie starring Whoopi Goldberg and Maggie Smith, Sister Act tells the hilarious story of Deloris Van Cartier (Alexandra Burke), a disco diva whose life takes a surprising turn when she witnesses a murder. Under protective custody she is hidden in the one place she won’t be found – a convent! Disguised as a nun and under the suspicious watch of Mother Superior, Deloris helps her fellow sisters find their voices as she unexpectedly rediscovers her own.

Joining Alexandra will be Joanna Francis as Michelle, Jon Robyns as Eddie, Karen Mann as Mother Superior and Rosemary Ashe as Sister Mary Lazarus. Alexandra Burke will perform the role of Deloris Van Cartier at all evening performances. At the matinee performances, the role of Deloris Van Cartier will be played by Joanna Francis.

Joanna Francis has recently finished performing in the West End production of The Lion King. Her other credits include Carmen Jones at the Royal Festival Hall, The Harder They Come at the Barbican and Stratford East and as Sybil in The Big Life at the Apollo Theatre.

Jon Robyns has played many leading roles in the West End including Rod/Princeton in the original cast of Avenue Q at the Noel Coward Theatre, Marius in Les Miserables at the Queen’s Theatre, Galahad in Spamalot at the Harold Pinter and Playhouse Theatres, Alternate Huey in Memphis at the Shaftesbury Theatre and Hollis in Road Show at the Menier Chocolate Factory. His other theatre credits include Enjolras in the 25th Anniversary tour of Les Miserables, Caractacus Potts in Chitty Chitty Bang Bang at the West Yorkshire Playhouse and most recently Emmett Forrest in Legally Blonde at Curve, Leicester. Next May he will return to Manchester (Opera House) in the new tour of the musical The Wedding Singer, playing the lead role of Robbie Hart.

Rosemary Ashe’s many West End credits include creating the roles of Carlotta in The Phantom of the Opera at Her Majesty’s Theatre, Miss Andrew in Mary Poppins at the Prince Edward Theatre and Felicia Gabriel in The Witches of Eastwick at the Theatre Royal Drury Lane, for which she was nominated for the Laurence Olivier Award for Best Supporting Performance in a Musical. Her other theatre credits include When We Are Married at the Garrick Theatre, Widow Corney in Oliver! at the London Palladium and Grandma Mole in the musical of The Secret Diary of Adrian Mole aged 13 and ¾ at Curve, Leicester.

Sister act is performed at Manchester’s Palace Theatre from 29 August to 3 September 2016.