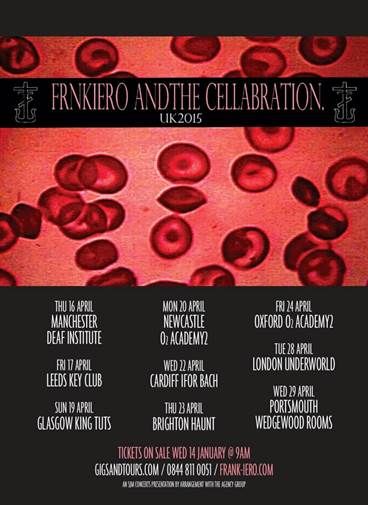 Frank Iero has announced his first UK headline tour as frnkiero andthe cellabration, which will see a performance at Manchester’s Deaf Institute on Thursday 16th April.

Having finished 2014 on a high, recording a BBC Radio 1 session and performing his first ever headline show in London at a sold out Barfly as well as performing at two packed ‘in-store’ crowds at Kingston’s Banquet Records in one day, he is clearly excited to be hitting the road in the aftermath of his debut solo work stomachaches and the release of videos joyriding and weighted, the two singles from the album.  Speaking of the tour and Stomachaches, he commented “I’m really looking forward to taking this full record to the UK in April. When making Stomachaches I really wanted you to feel like you were listening in on the songs as opposed to listening to them. And I believe the intimacy of venue’s we’ve chosen for this headline run will support that idea.”

Tickets for Frank Iero performing at The Deaf Institute on 16th April 2015 go on sale at 9am on Wednesday 14th January.

In Review: Teleman at The Deaf Institute
In Review: EofE Set for Sound Control
In Interview: Fryars