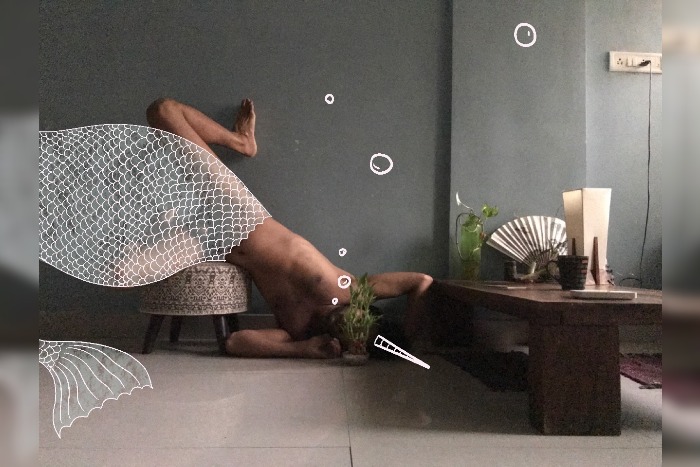 Five new online works have been released this week via the HOME Manchester website, the latest in the venue’s series of digital works, Homemakers.

The new Homemakers commissions include a story told through blog posts and instagram, an animated spoken word slam, a live adaptation of Luis Borges’ The Book of Imaginary Beings, an audio-visual trip to the Amazon and a one-woman exploration of grief and friendship.  The Homemakers series is presented by HOME Manchester alongside national partners, inviting artists to explore what live performance means when cultural buildings are closed and everyone is watching – and making – from home.

Tanmay Dhanania’s A Manual of Fantastical Zoology, is the only live event to be released by HOME this fortnight – and it will be streaming all the way from Mumbai.  Inspired by Jorge Luis Borges’ The Book of Imaginary Beings, and taking place on Saturday, 18 July at 2,30pm, it is an investigation into the psychology of isolation created by Soumyak Kanti DeBiswas and Tanmay Dhanania. The show asks what tricks our minds play on us in isolation, and what imaginary beings we start inhabiting.

In Karen Cogan’s Turkey Sausage Roll, performed by Faoileann Cunningham, a young woman is avoiding holding her girlfriend’s hand with her left hand and clutching a turkey sausage roll in her right. She’s a vegetarian but too polite to say so. Also, she is afraid if she opens her mouth she might vomit from grief. Her best pal is in a box being sung to, aggressively, by Aunty Una. We visit her restless brain as she survives the worst day of her life so far.

A Manual of Fantastical Zoology and Turkey Sausage Roll are part of the RADA Festival, the first in a series of six that will be presented via the HOME website.

Stockport-based Naomi Sumner Chan’s, Wait I’m from Wuhan, commissioned by Chinese Arts Now, uses serialised blog posts and Instagram posts to follow the story of Jasmine, originally from Wuhan, abandoned as a baby in Hankou train station and adopted by a White British family to grow up in England. For Jasmine, Wuhan was just a word on a piece of paper until now. Suddenly, since the outbreak of COVID-19, everyone is talking about the place where she was born and she’s no longer able to ignore her past and those she left behind.  The story begins on Wednesday 1 July when audiences will be able to see Jasmine’s first posts on her blog and Instagram page. A new blog post will be added every Wednesday for the following three weeks. Jasmine will stay in regular contact with her followers on Instagram posting every day throughout the month of July.

Edalia Day’s Animation Slam, commissioned by Harrogate Theatre, is an animated spoken word slam, pairing the ferocity and comedy of some of the sharpest minds and hearts in the UK spoken word scene with hand drawn animations by theatre maker and video designer Edalia Day.  An international panel of 3 judges will score 6 top poets on their punch, verve and all around awesomeness as they tackle subjects such as dating, relationships, politics, pandemics, gender, ableism, domestic violence and those annoying people who try to help but just end up making things worse. The poets taking part are Aiysha Humpreys, Bogsey, Dami Okhiria, Steve Tasane, Laurie Eaves and Sez Thomasin. The panel of judges includes the UK slam champion Tyrone Lewis, Agnes Török from Sweden, and Rikki Livermore from New Zealand.

Finally, in the Music Theatre Wales and London Sinfonietta-commissioned Amazon, Alex Ho and Elayce Ismail have created a poetic reflection in the form of music, text, and visuals, where a trip to the Amazon takes an unexpected turn.

All works are available via the HOME website, on a pay-what-you-can basis.