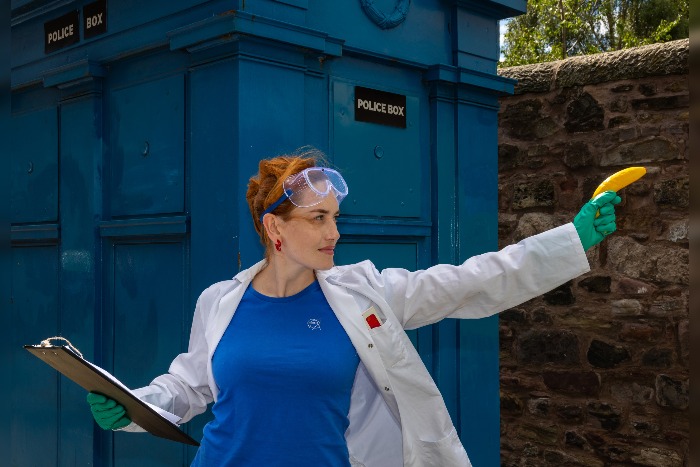 What would you change if you could travel through time?  The world’s first female time travelling doctor is coming to The Edge, Manchester, to help you decide.

Doctor Rosy Carrick brings her multi-award winning play about time travel, Passionate Machine, to Manchester’s The Edge Theatre after a run at New York’s SoHo Playhouse.  The show is coming to Manchester during a national tour, marking the only North West date for the Stalybridge borne writer and performer.

The show recounts how Rosy had to build a time machine to rescue her future self, stuck 100 years in the past where she had travelled in order to save Russian Revolutionary poet Vladimir Mayakovsky from suicide.

Given that her knowledge of quantum physics is limited to the works of Arnold Schwarzenegger, Rosy must summon the help of science’s greatest minds if she is to rewrite history and save herself…

She explains the reality of time travel, effortlessly taking in David Bowie,  Schwarzenegger, sci-fi, CERN and particle physics, self-discovery, motherhood, Dr Who, #MeToo and 80’s time travel films along the way.  The narrative is told as a true story, weaving itself into real-life events until fact and fiction become indistinguishable

Passionate Machine won Best New Play at the Brighton Fringe 2018 then walked away with The Infallibles Award for Theatrical Excellence at the Edinburgh Fringe.

The production is directed by Kate Bonna, Fringe First winner and recipient of Most Promising New Playwright Award at the 2018 Off West End Awards for All The Things I Lied About.

When does Passionate Machine run at Manchester’s The Edge Theatre?