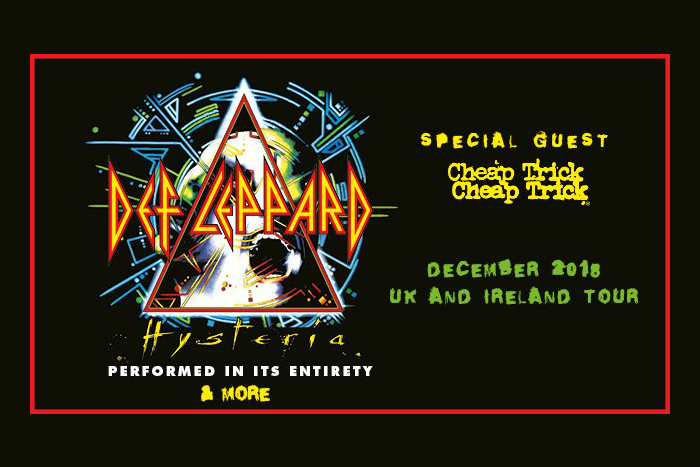 The news comes as the band make their entire recording catalogue available online via streaming and download platforms.

Speaking of taking the step to make their catalogue available, Joe Elliott commented, “It is with a mixture of relief & euphoria that we now see our entire catalogue finally getting a digital release. Having embraced every other format with open arms, especially & more recently the re-emergence of vinyl, we’re now going to be available to everyone everywhere and honestly, it’s as exciting as the original releases were.”

These will be the first Def Leppard UK and Eire tour dates since the sold-out Arena run in late 2015.  For the tour, the band will perform the 1987 Hysteria album in full plus other Def Leppard hits, leading Rick “Sav” Savage to comment, “After many requests from fans in the U.K, I’m delighted that we can bring the whole “Hysteria” album to arenas across Britain and Ireland later this year. From ‘Women’ to ‘Love and Affection’ plus many other faves thrown in for good measure. Oh, and our old pals Cheap Trick will be there also to help with the celebrations!! We can’t wait’.

Where and when do Def Leppard play in Manchester?

When do tickets for Def Leppard’s Manchester gig at Manchester Arena go on sale?

Tickets for Def Leppard headlining at Manchester arena go on sale at 9am on Friday 26 January 2018.  Support comes from Cheap Trick.