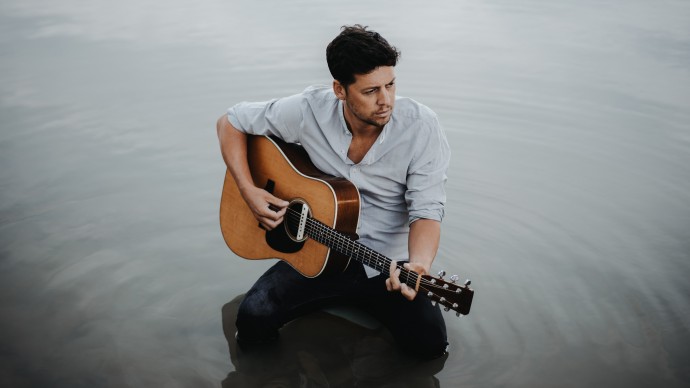 Manchester singer-songwriter Dave Fidler will release new album Songs From Aurora in Spring 2019 supporting by a launch gig at The Eagle.

Songs From Aurora is Dave Fidler’s first release in over four years, marking his follow up to the acclaimed debut I’m Not Here.  The album was inspired by his travels on the festival circuit throughout 2018 and promises intimately-told, warmly-inviting stories with arrangements of a hushed majesty.  Country-tinged songs meet bluesy railroad music; harmonies are blended with folk pop; as the album tells tales of performing to a Haitian women’s prison and getting trapped beneath a collapsing house in the midst of a Los Angeles earthquake.

With much of the new album conjured from within the comforting belly of his trusty caravan ’Aurora’, that would shelter him during its time of writing, there could only ever be one title for the new release. ‘Songs From Aurora’ was recorded and produced at Dave Fidler’s personal studio: The Fuse, in Manchester, with further mixing by Alan Lowles at Airtight Studios in Chorlton, and mastering by Geoff Pesche at the legendary Abbey Road Studios.

Dave Fidler will support the album with a UK tour opening at The Eagle Inn on 5 April before five further dates take him across the UK including Liverpool’s Handyman and London’s Betsey Trotwood.  He will then set out on her debut solo headline tour of the USA and Europe.

The twelve track Songs From Aurora is released on 27.27 Records.

When does Dave Fidler perform at The Eagle?

Dave Fidler opens his UK tour at The Eagle on 5 April 2019.  The Manchester gig is one of six UK dates announced: