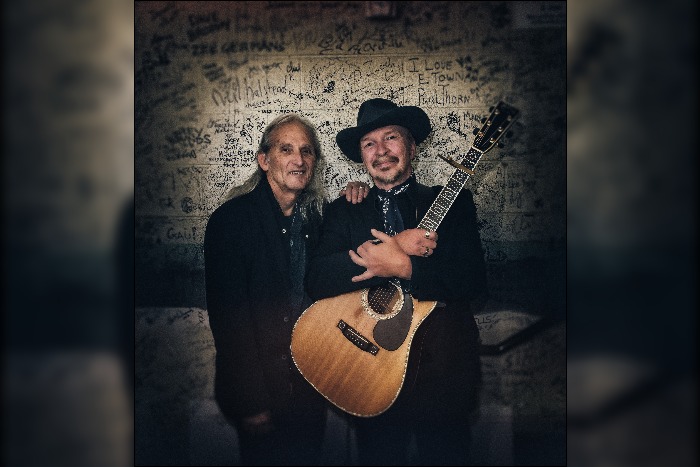 Despite three decades of friendship and a myriad of shared influences, it was only last year when folk heroes Dave Alvin and Jimmie Dale Gilmore finally collaborated.  And now they’re coming to Manchester’s Band on the Wall.

“It’s like we’ve been playing together since we were kids” explains Californian Dave Alvin of his partnership with Texas native Jimmie Dale Gilmore.  But despite that it was 2019 twelve-city tour which brought the two seasoned veterans together on the road where they found a mutual love of New Orleans Rhythm and Blues, Texas and West Coast Country Music, traditional folk and early Rock n Roll.

They planned an album as soon as the tour wrapped, forging the twelve-song collection Downey To Lubbock, which takes on a diverse range of American music spanning nearly one hundred years.  The album features ten covers and two Dave Alvin originals, the autobiographical title track and the fantastical Billy The Kid and Geronimo which sees the duo trading verses.

The album explores the musical pipeline between their home states, taking in the work of Lightnin’ Hopkins, Brownie McGhee and Johnny ‘Guitar’ Watson.

And now the duo are back on the road with a string of UK dates including Manchester’s Band on the Wall.

When do Dave Alvin and Jimmie Dale Gilmore headline at Manchester’s Band on the Wall?

Dave Alvin and Jimmie Dale Gilmore headline at Manchester’s Band on the Wall on 30 October 2019.