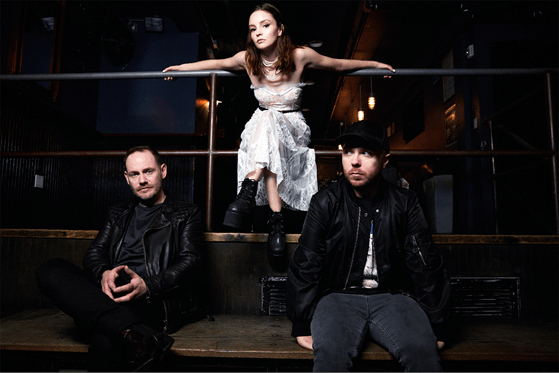 CHVRCHES have announced a run of UK and Ireland dates including a Manchester gig at Victoria Warehouse in February 2019.  The announcement follows the release of their highly acclaimed third album Love Is Dead.

CHVRCHES are currently in the midst of a run of huge summer festival performances around the world including Parklife, TRNSMT and Citadel in the UK; NOS Alive and Primavera in Europe and The Governors Ball and Lollapalooza in the US.

Upon its release in May of this year, Love Is Dead became the band’s third successive top 10 UK album, following their 2013 debut The Bones of What You Believe and the 2015 follow up Every Open Eye.

Love Is Dead features the singles Miracle and Get Out, as well as the previously released My Enemy (feat. The National’s Matt Berninger) and Never Say Die.  The album is about growing up and “coming to terms with the fact that there are great things in the world and there are awful things in the world and that you can’t get one without the other,” says sing and songwriter Lauren Mayberry.

When do CHVRCHES headline at Manchester’s Victoria Warehouse?

When do tickets for CHVRCHES UK and Ireland tour go on sale?

Tickets for CHVRCHES February 2019 UK and Ireland tour go on sale at 9am on Friday 20 July.