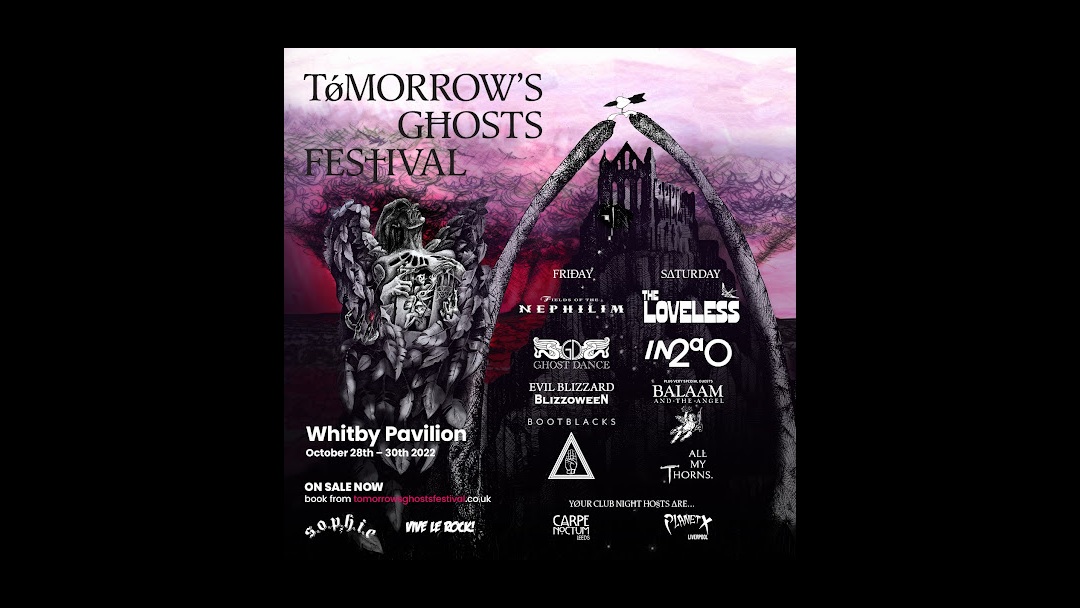 Tomorrow’s Ghosts Festival has completed its 2022 line-up which includes The Loveless, Fields Of The Nephilim and Into A Circle.

The festival, which takes place at Whitby Pavilion in October returns to the venue for Halloween 2022.  The celebration of all things gothic and alternative includes music, markets, performance, literature and more.  The festival also promises to remain central to the wider events taking place across the town, which is perhaps most famously known to be the official birthplace of Dracula.

Tomorrow’s Ghosts Festival is inviting gothic and alternative sounds from across Europe and the USA.

Headlining the Friday night will be original goth rock messiahs Fields of the Nephilim. One of Goth’s most significant artists, Carl McCoy and co. will be reacquainting audiences with their magnetic, macabre appeal and a boundary-pushing arsenal that includes scintillating singles such as “Moonchild”, “Psychonaut”, “Summerland” and so much more.

And on Saturday night, the headline honours will be left to: The Loveless. Comprising Marc Almond (Soft Cell), Neal X (guitarist of Sigue Sigue Sputnik), plus Mat Hector and Ben Ellis (Iggy Pop’s rhythm section) and James Beaumont (Hammond organ), the band will be embracing their darkest tendencies and performing distorted versions of songs familiar, and not-so familiar.

Elsewhere, other incredible acts confirmed to be appearing at Whitby’s premier gothic and alternative arts festival include very special guests Into A Circle, Ghost Dance, and Balaam And The Angel, as well as exclusive performances from Bootblacks, All My Thorns and Evil Blizzard present… ‘Blizzoween’.

For the first time in 2022, Tomorrow’s Ghosts will be teaming up with the SOPHIE LANCASTER FOUNDATION. A charity committed to stamping out prejudice, hatred and intolerance everywhere, the ideals of the Sophie Lancaster Foundation and Tomorrow’s Ghosts couldn’t be any closer aligned.

14 years on from Sophie’s tragic passing in a vile hate-related crime, Tomorrow’s Ghosts is honoured to be aiding the exceptional work of the Sophie Lancaster Foundation as a key partner at the 2022 festival. As well as having a stall at the event and talking about their work, the Foundation will be undertaking educational workshops with local schools in the run up to the festival.

When does Tomorrow’s Ghosts Festival run?