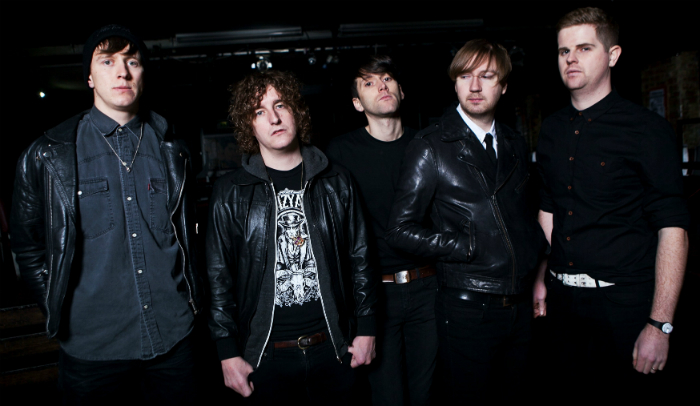 Leeds band The Pigeon Detectives have revealed their new song Sounding The Alarm in the run up to their forthcoming tour which sees the band performing at Manchester’s Gorilla on 11 March.

Formed in 2002 The Pigeon Detectives are Matt Bowman on lead vocals, Oliver Main and Ryan Wilson on guitars, Dave Best on Bass, and Jimmi Naylor on drums.  Friends from school and having known one another since they were 12, the band enjoyed a meteoric rise starting in Leeds where they signed with local label Dance to the radio, going on to sell over half a million records of their debut album Wait for Me.

Sounding the Alarm is a song that contradicts the bluster energy in the band’s previous material with a subtle almost-whispered vocal floating over a pulsating synth and sparse electronic beat, echoing a ‘Get Ready’-era New Order.  The song is a perfect example of how the band’s new material challenged their previous approach to studio records. The track features layers of synth lines building towards an epic coda of driving guitars behind the chorus line ‘All along you were sounding the alarm’.

Fifth album Broken Glances follows the success of previous offerings, platinum-selling debut Wait for Me, gold selling Emergency, Up guards and at em! and We met at Sea.  As with previous albums Broken Glances is accompanied by a UK tour, calling in at Manchester’s Gorilla on 11 March and a series of festival appearances over the summer.

The Pigeon Detectives perform at Manchester’s Gorilla on 11 March 2017.  Broken Glances is released on 24 February.