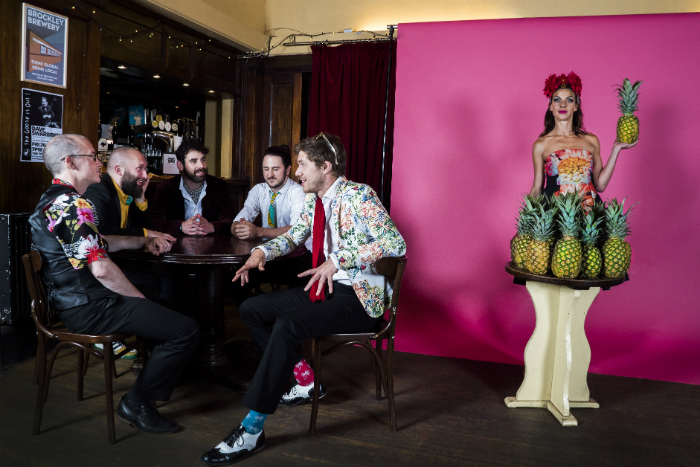 Up-and-coming UK singer songwriter Narn performs a free gig at Manchester’s The Gas Lamp.  The performance comes just a few weeks before the excellent singer and guitarist (and and several other instruments besides) releases her new album Wasn’t Born To Lose.

Upgraded from the Deaf Institute due to demand.  Alejandro Rose-Garcia, aka Shakey Graves, returns with his now record And The War Came and a tour to boot.  “The first album was me wanting to burn down my life, cut my hair off, and run screaming into the woods,” says Rose-Garcia. “This album is the trials and tribulations of becoming domesticated, letting people into your world and letting go of selfishness—the story of becoming a pair, losing that, and reconciling with the loss and gain of love.”  Tickets £10.

Molotov Jukebox (pictured above)return to Manchester just two weeks after the release of their highly anticipated second album Tropical Gypsy and as their tour comes towards an end.  Latin influenced horns, accordion and violin; bound over guitar, bass and drums by the vocals of musician and actress Natalia Tena (Game of Thrones).  Famed for their ferocious performances around the globe in both English and Spanish, none of the band’s undeniable live energy has been allowed to escape during recording.  They’re infectious and hypnotic and they’re not to be missed. Tickets £14.

This concentrated nexus of romance, recollection, historic struggles and tragedies, and peerless craftsmanship – coupled with the hopes, fears, and isolation that accompany transition – formed the backdrop of The Narrows, Phillips’ up-coming album on Yep-Roc Records. Bathed in a woody, warmly reverberating sonic signature, the album’s thirteen songs are marked by longing and a resolute sense of purpose: As though hurling yourself full-force into the unknown is as sensible as any other more commonly prescribed course. After all, what feels unknown may be residing just below the surface – should you be willing to dig for it and be open to discovery.  Tickets £15.

One of the most successful country music groups of all time, the Grammy award winning trio Dixie Chicks make their Manchester Arena debut. Their line-up has changed a little since originally forming in 1989 and they may have been long-time exiles from the country scene and embroiled in the odd controversy, but they have have still enjoyed incredibly successful albums, four of which (from the Sony era) have recently been re-released on vinyl.  Support comes from Augustana. Tickets £48.50.