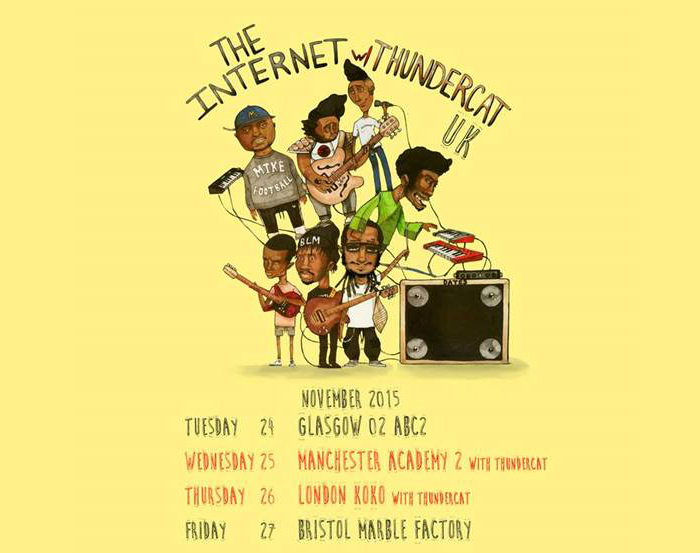 Fronted by Syd and Matt Martians, The Internet released their third album Ego Death in June.  They had branched off from the Odd Future collective and started their own band in 2011, releasing three albums in just four years.  Syd had previously been Odd Future’s DJ and producer, but began writing her own songs again making her first full-length album with Matt as The Internet. When they play live, The Internet is a six-person band whose youngest member is 17, will all band members contributing their talents to The Internet’s latest album, Ego Death.

Famed bassist, producer and singer Thundercat, who co-headlines the Manchester and London tour dates, released his latest mini-album, The Beyond/ Where Giants Roam, earlier this year featuring the track Them Changes. Aside from his own projects, the legendary musician has featured on Flying Lotus’s last three albums, Kendrick Lamar’s To Pimp a Butterfly and Erykah Badu’s New Amerykah Part 1 and Part 2, among others.

Tickets for The Internet and Thundercat performing at Manchester Academy 2 on 25 November 2015 go on sale at 9am on Friday 14 August.

In Review: The Sugar Hill Gang at Gorilla
In Review: Jules Rendell, Kristyna Myles and Ione-Mai at The Anchor
In Review: Girl Friend at The Ruby Lounge