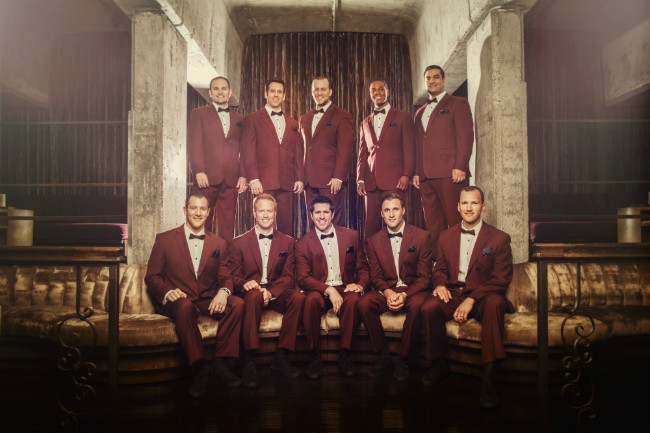 A Cappella group Straight No Chaser have announced a series of UK and Ireland tour dates as they make their debut on these shores.  The tour includes a performance at Salford’s Lowry Quays Theatre on 3rd February 2015.

The US group, hailed by the Chicago Sun Times as ‘A cappella pioneers’ have become a phenomenon with a huge fan base as they have appeared on television, released CDs and amassed an incredible 50 million YouTube views.

The group came together at Indiana University back in 1996, as ’10 guys who happened to be good friends who also liked to sing’.  The group members were selected for personality as well as vocal talent – essential for a group which is far from the traditional strait-laced, blue blazer stereotype.  In fact this is much more of a vaudeville-style kitsch, incorporating a contemporary repertoire and dynamic approach.

Straight No Chaser have just released their fourth album, Under The Influence, for which they have drawn in contributions from the likes of Phil Collins, Dolly Parton, Jason Mraz and more.

Tickets for Straight No Chaser performing at Salford’s Lowry Quays Theatre on 3rd February 2015 go on sale at 10am on Friday 12th September priced £29.50/£19.50 plus booking fee.

In Review: Flash Mob at the Lowry Theatre