Sounds of the City returning in 2019 with huge lineup 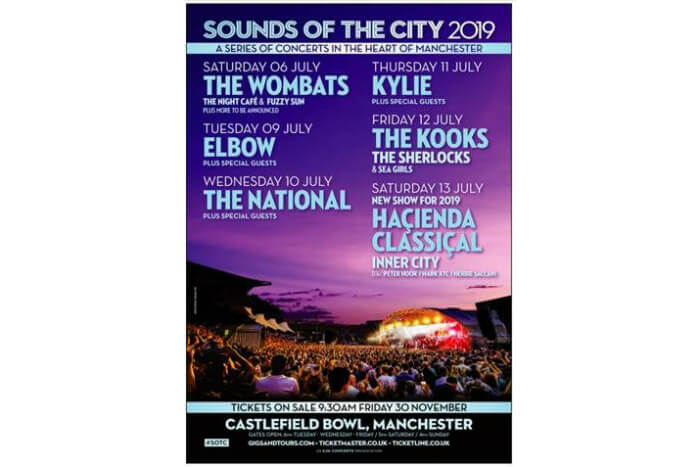 Sounds of the City will return to Castlefield Bowl in July 2019 with a huge lineup including Elbow, The Kooks, Kylie Minogue and The Wombats.  The first hint at the line-up recently landed with news that Kylie will play Castlefield Bowl on 11 July 2019.

The opening headliners at the series of Manchester gigs will be The Wombats.  Their meteoric rise to become one of the country’s biggest guitar acts began 11 years ago with their platinum selling debut A Guide to Love, Loss and Desperation. Their recent album Beautiful People Will Ruin Your Life peaked at number 3 in the UK album chart.

After her recent shows as part of her Golden UK Arena Tour, Kylie returns to Manchester for a show at Castlefield Bowl.  Her latest album Golden was released earlier this year and was her sixth number one album to date.

With the roar of their recent sold-out UK arena tour still echoing in their ears and more than one billion streams under their belts, The Kooks will be coming to the Bowl on Friday 12th July. The band released their fifth studio album Let’s Go Sunshine in the summer.

Ending the run of gigs, Haçienda Classiçal also returns with Manchester Camerata for its fourth event at Castlefield Bowl in what has becoming an annual and signature event for FAC 51 The Hacienda in its home city. The clubbing classical cross-over concept has proved wildly successful and all the Castlefield dates have all fully sold out well in advance. Live support comes from Inner City who are playing their first UK concert in over twenty years.

When do tickets for Sounds of the City 2019 go on sale?