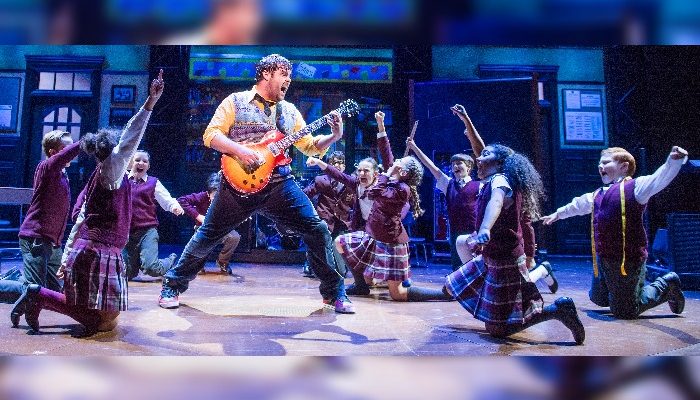 School of Rock – The Musical is set to come to Manchester’s Palace Theatre in 2021 as the award-winning West End show goes on a major UK tour.

Based on the hit movie starring Jack Black, School of Rock – The Musical centres around Dewey Finn, a failed, wannabe rock star.  Finn tries to earn some extra money posing as a substitute teacher at a prestigious prep school where he turns a class of straight-A students into a guitar-shredding, bass-slapping rock band.  While teaching these pint-sized prodigies what it means to truly rock, Dewey falls for the school’s beautiful, but uptight headmistress, helping her rediscover the wild child within.

School of Rock – The Musical features 14 new songs from Andrew Lloyd Webber and all the original tracks from the movie.

The production opened at the New London Theatre (now the Gillian Lynne Theatre) in November 2016 to 5-star reviews and widespread critical acclaim. It went on to win the Olivier Award for Outstanding Achievement in Music. The Broadway production recently concluded its run at the Winter Garden Theatre with a US national touring production continuing.  An Australian production opened at Her Majesty’s Theatre in Melbourne last October.

School of Rock – The Musical features music from Andrew Lloyd Webber and lyrics by Glenn Slater, based on the book by Julian Fellowes.  It is directed by Laurence Connor (Joseph and the Amazing Technicolor Dreamcoat, London Palladium 2019) with choreography by JoAnn M.Hunter, set and costume designs by Anna Louizos, lighting design by Natasha Katz, sound design by Mick-Potter, music supervision by John Rigby with Matt Smith as musical director.

When does School of Rock – The Musical run at Manchester’s Palace Theatre?

School of Rock – The Musical runs at Manchester’s Palace Theatre from 21 June to 3 July 2021.