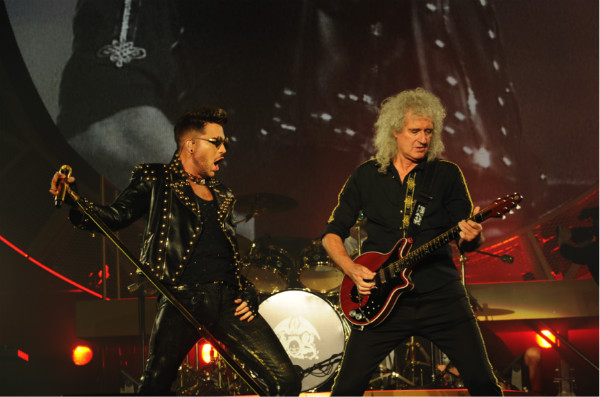 Queen and Adam Lambert have announced that they will be going on tour through the UK and Europe in early 2015, including a date at Manchester’s Arena on 21st January 2015.  The tour follows only four months after the conclusion of their sold out tour of America, Australia and New Zealand and comes two years after their last UK and Europe performances.

Such was the demand for tickets that their 24 US shows sold out in record time, but fans who were lucky enough to get tickets were thrilled with what their saw and critics alike were astounded.  The same demand is expected for these shows.

The union of the two came off the back of teaming up in 2009 to perform the rock anthem We Are the Champions on American Idol’s season eight finale which was repeated two years later at the MTV European Music Awards in Belfast before they performed their first live concerts in the summer of 2012 with three sold-out shows in the UK at London’s Hammersmith Apollo.

Adam Lambert commented “On the technical side, it’s definitely more of a production than two years ago.  We’ve had a lot more cities to visit and so I think we all decided to build up the visuals and the stage accordingly, and of course we do all the hits.”

Brian May added “We have a very interesting set design.  It’s big and daring.  We’re going to do it to the max.”

Although the thought of Queen performing without Freddie Mercury worried some fans, it seems that the partnership with Adam Lambert has worked extremely well.  “He’s sensational.  He has this amazing range, ’cause Freddie had a great range.  Adam can really cover it” says Roger Taylor, “He’s an extraordinary singer and a real talent.  I feel he fits into our sort of theatricality.  It is very comfortable.”

Alas, it seems that unfortunately the pairing is likely to be limited to live shows, at least for now, as Lambert is currently writing and recording his third album and May and Taylor are preparing their forthcoming compilation album Queen Forever, which features previously unreleased material recorded with Freddie Mercury (due for release on 10th November).