Barnum coming to the Palace Theatre 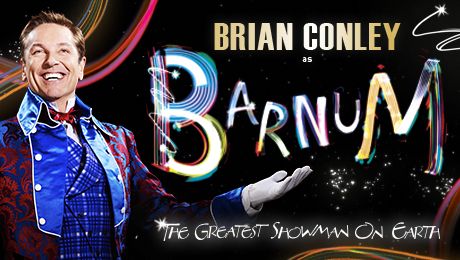 Originally a smash-hit on Broadway in 1980, when it starred Glenn Close and Jim Dale, the new production will star Brian Conley and Linzi Hateley.

Barnum was married to Chairy. Ever the practical one, Chairy was the one who made Barnum’s dreams come true, in a marriage where each saw the world from a very different viewpoint.

Barnum’s renowned life as a true showman, whose imagination lit up the world with colour warmth and excitement, will be brought to life on the stage in a production which first opened at Chichester Festival Theatre’s acclaimed state-of-the-art Theatre in the Park in July 2013, playing to almost 70,000 people. It is now on its first national tour, taking the story of the creation of Greatest Show on Earth, Barnum and Bailey’s Circus (a collaboration between Barnum & J A Bailey), to audiences across the country.

Having previously starred as Fagin in Cameron Mackintosh’s hugely successful production of Oliver! Brian Conley’s other stage credits have included Edna Turnblad in Hairspray at the Shaftesbury Theatre and Caractacus Potts in Chitty Chitty Bang Bang at the London Palladium. Conley was also nominated for an Olivier Award for Best Actor in a Musical for his performance as the great Al Jolson at the Victoria Palace.

Linzi Hateley has also been nominated for an Olivier Award for her performance as The Narrator in Joseph and the Amazing Technicolor Dreamcoat. She has also starred on Broadway as well as in the West End as Donna in Mamma Mia!, Roxie in Chicago, Rizzo in Grease and Eponine in Les Misérables.

Cy Coleman has produced the music for Barnum with a wonderful, exuberant score that includes the hits Come Follow The Band, The Colours Of My Life and There Is A Sucker Born Ev’ry Minute.