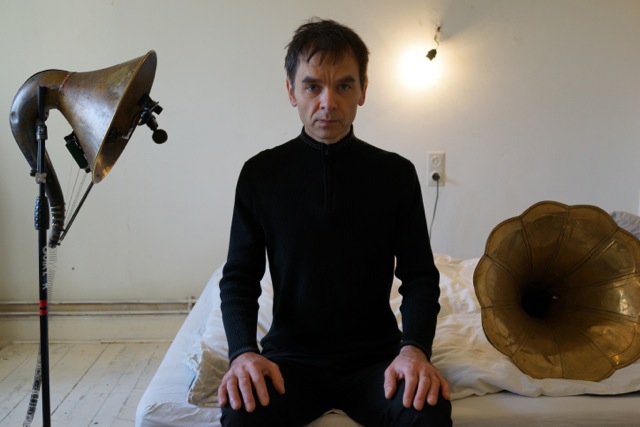 American Thomas Truax is one of the most imaginative characters on the pop music fringe. Since the early 2000′s, he’s been releasing records and traveling the world performing with his evolving “band” of surreal self-made Harry Partch-esque instruments including a motorized drum machine made of bike wheels called ‘Mother Superior’ and a souped-up Dr. Seuss-ian Gramophone called ‘The Hornicator’, as well as his venerable resonator guitar (named simply Hank).

Dubbed “One of rock’s great eccentrics” by The Oxford Times and “one of the five or ten best singer/songwriters in the world that you’ve never heard of” by Splendid Magazine, he crafts rich, poetically evocative and lively songs about insects, trees, technology, and a lifelong obsession with things lunar, including various reasons ‘Why Dogs Howl at The Moon’. His eight studio LPs include a highly-rated covers album ‘Songs From The Films Of David Lynch’, and his latest, ‘Jetstream Sunset’, features a powerhouse special ingredient in drummer Brian Viglione (of the Dresden Dolls/Violent Femmes). But while Thomas’s albums have received considerable praise, it’s his energetic and often surreal mix of man, machine, musicianship, storytelling, and audience interaction that make up the live shows for which he is best known.

Thomas’s surreal rendition of the classic ‘Greensleeves’ is featured on new release, the Shakespeare-related compilation album ‘Food Of Love’.

Truax’s mind-boggling live show sees the singer-songwriter perform live with an array of surreal musical contraptions of his own creation.  Expect to see a motorized drum machine made of bike wheels called ‘Mother Superior’ and a souped-up Dr. Seuss-ian Gramophone called ‘The Hornicator’, as well as the tour debut of an all new instrument: ‘the Saxogramophone’ – needs to be seen (and heard) to be believed!

Thomas Truax performs at The Eagle Inn on Friday 20 May 2016.