Previewed: The Maids at Home Manchester 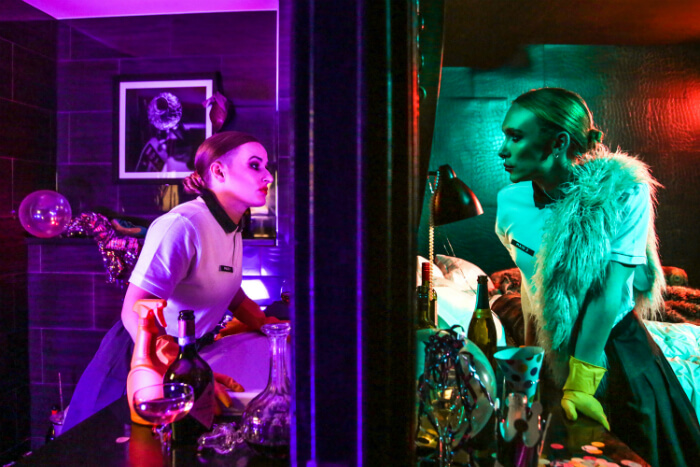 The Maids is based on the true story of the murderous duo, The Papin Sisters.  The play focuses on class conflict, sexual identity and political outcasts.

For this production, Home will transfer its main house theatre in to the round for the first time.  The stage will be raised up to the height of the circle, building over the stalls seating area.  Audiences will be able to watch from both on and off the stage in a specially built seating area.

Genet wrote The Maids in 1947 whilst serving a prison sentence, as an imaginative and intellectual escape. Premiering the same year, Genet’s chilling tale follows the story of a pair of maids who create violent, darkly humorous fantasies while dressed in the opulent clothes of their mistress. Indulging in theatrical re-enactments of the power structures which define their lives, the line between make-believe and reality becomes increasingly distorted, as it becomes clear that the aim of the game is murder…

The Maids at Home Manchester stars Jake Fairbrother as Claire and Luke Mullins as Solange.  Danny Lee Wynter completes the cast in the role of Madame.

Lily Sykes makes her Home Manchester directorial debut.  Speaking about The Maids, she commented, “With the political climate in the UK and around the world as it is, a story about two opposing classes, whose antagonism is fuelled by their inability to understand each other, resonates strongly. In the prison of social conditioning, the only escape open to these characters is through violent action. I’m very excited to be directing this play, which has all the utopian and subversive power which theatre can have, in the UK and to bring it to Manchester in particular.”

When is The Maids performed at Home Manchester?

The Maids is performed at Home Manchester from 16 November until 1 December.  Tickets are priced £10-£26.50 (concessions available).