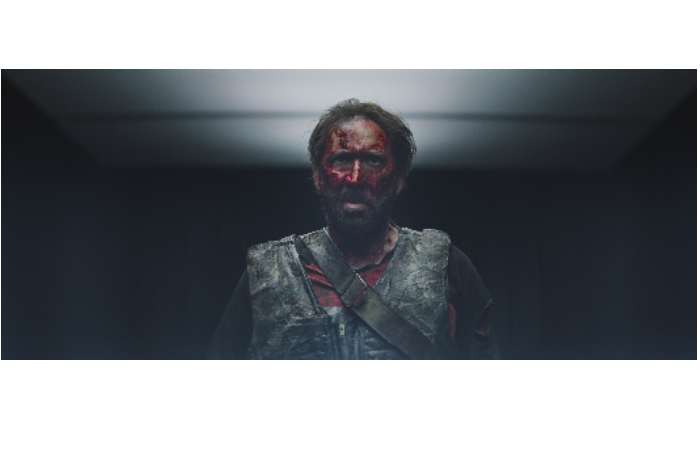 Home Manchester and Film4 have announced the programme for the third annual FilmFear season.  Six days of horror, extreme cinema, cult favourites and special guests will take hold at Home Manchester, culminating in a Halloween screening of The Evil Dead.

The event will open on Friday 26 October with acclaimed Scandi fantasy Border, co-written by the author of Let The Right One In.  A visceral fusion of Nordic noir, social realism and supernatural horror, Border’s genre-defying tone is matched in fellow Swedish title Videoman, a mystery-thriller/relationship-drama that will surprise audiences with its tonal shifts, while the chilling horror St. Agatha from celebrated filmmaker Darren Lynn Bousman (Saw II, III, IV) bolsters the emerging ‘Nunsploitation’ genre. Let the Corpses Tan is a ferocious take on Euro Westerns and Italian crime ‘Poliziotteschi’ genre from Belgian directing duo Hélène Cattet and Bruno Forzani (The Strange Colour of Your Body’s Tears), and genre fans can find some light relief in horror comedy One Cut of the Dead, the cult sensation from Japan that turns the zombie movie on its head. US teen-revenge horror Assassination Nation – a biting black comedy set in a suburban town at the mercy of an online hack attack – will have a special preview before its November release, and the much-hyped Sundance and Cannes smash-hit Mandy, starring a blood-soaked Nicolas Cage alongside Andrea Riseborough and Linus Roache, will be a must-see on HOME’s biggest screen.

As well as movies from across the globe, British talent will also be featured.  Matthew Holness’ debut Possum will be screened, starring Mission Impossible villain Sean Harris and veteran actor Alun Armstrong. Best-known for playing Garth Marenghi in the cult Channel 4 series, writer-director Holness adapted his own short story for the screenplay; Holness will be signing copies of the story as featured in the recently re-issued anthology ‘The New Uncanny’ before the screening, as well as participating in a post-screening Q&A. Also in attendance at FilmFear is actor-writer-comedian Toby Hadoke who will take part in a Q&A following a special “listening event” of Nigel Kneale’s The Road. Based on the legendary lost 1963 TV play and scripted by Hadoke for BBC Radio 4, The Road stars Mark Gatiss and Adrian Scarborough and tickets to the broadcast will be free to anyone with a FilmFear screening ticket.

FilmFear 2018 at Home Manchester will also screen three classic horrors with John Carpenter’s They Live and The Fog as well as Sam Raimi’s infamous The Evil Dead.

Speaking about the festival, curator David Cox, commented, “It’s great to be returning with the FilmFear season for a third year, with a programme of films we’re excited to be sharing with the HOME audience. Horror comes in so many different forms, and this year’s line-up celebrates that variety both in terms of subject and style. The genre itself seems to be more popular than ever at the moment, both at the cinema and on TV, but the films we’re showing prove that this success isn’t just a fad, with stories rooted in a wide range of traditions and cultures.”

So, what’s on at FilmFear 2018 at Home Manchester?

Border (Gräns)
Friday 26 October, 20:30
Dir Ali Abbasi/SE DK 2018/108 mins/Swedish wEng ST
Eva Melander, Eero Milonoff, Viktor Åkerblom
A customs official with a super-sensitive sense of smell is drawn into a conspiracy that turns out to have a bizarre folkloric twist. Based on a story by John Ajvide Lindqvist, the author of Let the Right One In, this genuinely surprising Scandi thriller blends fantasy, romance and horror to end up as something entirely unique.

One Cut of the Dead (Kamera o tomeru na!)
Saturday 27 October, 18:10
Dir Shin’ichirô Ueda/JP 2017/96 mins/Japanese wEng ST
Takayuki Hamatsu, Yuzuki Akiyama, Harumi Shuhama
Beginning with an almost 40-minute single-take set piece that sets the tone for what’s to come, this cult sensation from Japan is a zippy, silly meta-comedy that’s stuffed with great, self-referential gags about making low-budget horror movies. The physical humour is perfectly applied to the zombie action, but it’s the development of the character comedy across the film’s three distinct acts that really helps deliver the crowd-pleasing climax. All together now: POM!

Mandy
Saturday 27 October, 20:20
Dir Panos Cosmatos/US BE 2018/121 mins
Nicolas Cage, Andrea Riseborough, Linus Roache
A wild and grandiose story of love, revenge and the supernatural, Panos Cosmatos’ follow-up to Beyond the Black Rainbow at times feels like a cinematic sculpture rather than just an out-there, blood-soaked Nicolas Cage movie – though it’s very much the latter too. Cage goes crazy when love of his life Andrea Riseborough is spirited away by a dark-magic cult, and the film itself goes right along with him. This is one you have to see on the big-screen, not just for the visuals but also for the score by the late Johann Johannsson (Sicario, Arrival).

They Live
Sunday 28 October, 16:00
Dir John Carpenter/US 1988/95 mins
Roddy Piper, Keith David, Meg Foster
Conspiracy theory sci-fi from John Carpenter that’s a firm fan favourite thanks to its mix of goofy B-movie stylings and subversive satire. Aliens move amongst us using subliminal imagery to control our minds. Luckily for humanity, wrestler-turned-actor ‘Rowdy’ Roddy Piper can literally see through their sinister plans with his x-ray specs and he takes the fight to them in a more physical fashion.
They Live also features one of cinema’s all-time great brawls – a real bare-knuckle showstopper – and, of course, another memorable John Carpenter score.

Let the Corpses Tan (Laissez bronzer les cadavres)
Sunday 28 October, 18:20
Dirs Hélène Cattet, Bruno Forzani/FR BE 2017/92 mins/French wEng ST
Elina Löwensohn, Stéphane Ferrara, Bernie Bonvoisin
The directors of Giallo tributes Amer and The Strange Colour of Your Body’s Tears return with a ferocious take on Euro Westerns and the Italian ‘Poliziotteschi’ genre. A remote artist’s hilltop hideaway is the setting for an all-guns-blazing stand-off between crooks and cops in this violently beautiful work of art, a film in which infinite care has been lavished on every single extreme second.

Assassination Nation
Monday 29 October, 18:10
Dir Sam Levinson/US 2018/110 mins
Odessa Young, Hari Nef, Suki Waterhouse
A clique of high school girlfriends find their lives exposed when a stranger starts revealing their online secrets to the world, forcing them to take no prisoners in an attempt to calm the storm of scandal. The biting black comedy and violent action is a blast, but there’s also a strong horror vibe to this tale of societal breakdown.

Videoman (Videomannen)
Monday 29 October, 20:40
Dir Kristian A. Söderström/SE 2018/93 mins/Swedish wEng ST
Stefan Sauk, Lena Nilsson, Morgan Alling
One of the stand-out discoveries at August’s FrightFest, this mystery-thriller will strike a chord with anyone who’s ever collected VHSs, DVDs or any form of physical media. It’s also a treat for retro horror fans, as it follows the travails of a videotape obsessive who gets his hands on a rare item that could solve all his problems. However, his carefully ordered existence (and tape archive) is threatened when the Giallo-style plots of his favourite films intrude into his everyday life. All of a sudden, not rewinding a tape doesn’t seem like such a heinous crime after all.

Possum + Q&A
Tuesday 30 October, 18:20
Dir Matthew Holness/GB 2018/85 mins
Sean Harris, Alun Armstrong, Charlie Eales
Harris is on magnificently twisted form as Philip, a troubled children’s puppeteer battling surreal secrets from his past and Possum, the hideous hand puppet he keeps in a black leather case. Philip finds escaping the will of Possum is as hard as dealing with his demons.
Event: We will be joined by director Matthew Holness for a Q&A following this screening.

The Fog comes to Home Manchester at FilmFear2018

The Fog
Tuesday 30 October, 20:40
Dir John Carpenter/US 1980/90 mins
Adrienne Barbeau, Jamie Lee Curtis, Janet Leigh
Looking to continue the terror but in a different style, John Carpenter followed up his smash-hit Halloween with this effectively spooky ghost story evocatively set in a California coastal town. One hundred years after the sinking of a ship in local waters a mysterious fog rolls in, bringing with it strange events and spectral figures. A roll-call of genre favourites – Jamie Lee Curtis, Janet Leigh and Adrienne Barbeau – attempt to solve the mystery, with Carpenter providing a supernatural atmosphere and a spine-tingling score.

The Evil Dead
Wednesday 31 October, 20:40
Dir Sam Raimi/US 1981/85 mins
Bruce Campbell, Ellen Sandweiss, Richard DeManincor
A horror classic returns to the big-screen for Halloween, with cult leading-man Bruce Campbell fighting the eternal evil laying siege to his cabin in the woods. Stephen King dubbed this ‘the ultimate experience in gruelling terror’ back in the early 80s and, although it’s since been reappraised by some as a horror-comedy, King’s initial take still stands – despite some slapstick gore, director Sam Raimi’s remarkable debut is relentless, ferocious and unapologetic nightmare fuel.