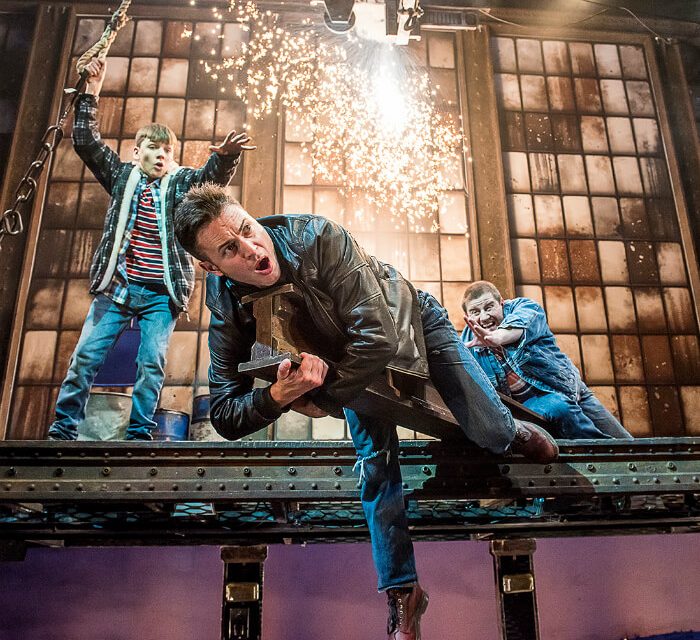 The Full Monty lands at Manchester Opera House for a one-week run on 18 February 2019 as the story of six out-of-work, impoverished steelworkers from Sheffield comes to life.

The Full Monty has become a hugely popular theatrical productions.  The play about six out-of-work, impoverished steelworkers from Sheffield with nothing to lose took the world by storm.  It has since gone on to become one of Britain’s most successful shows.  Based on the smash hit film and adapted for the stage by Oscar-winning writer Simon Beaufoy, the hilarious production features iconic songs by Donna Summer, Hot Chocolate and Tom Jones.

Who stars in The Full Monty at Manchester Opera House?

The cast is led again by Gary Lucy (Hollyoaks, EastEnders, The Bill, Footballer’s Wives) as Gaz.  Joining him are Andrew Dunn (best known as Tony in Dinnerladies and for his regular appearances playing Alastair Campbell in Bremner, Bird & Fortune) as Gerald, Louis Emerick (Mike Thornberry in Coronation Street, Norman the Doorman in Benidorm, Brookside, Last of the Sumer Wine) as Horse, Joe Gill (Finn Barton in Emmerdale) as Lomper, Kai Owen (Rhys in Torchwood & Pete in Hollyoaks) as Dave and James Redmond (Finn in Hollyoaks & Abs Denham in Casualty) as Guy.

Joining them are Liz Carney as Jean, Amy Thompson as Mandy, Bryonie Pritchard as Linda and Keeley Fitzgerald as Sharon. Through them we see the other side of the story, the challenging journey they face to stand by their men and how they ultimately take their hats off to them all. Other cast members include Andrew Ashford, Stephen Donald, Alex Frost, Fraser Kelly and Lee Toomes.

This new production of The Full Monty is directed by Rupert Hill, whose credits include the films Leatherbird, Mole Hills and Rolling with Punches.

The production is designed by Robert Jones (National Theatre  and RSC) Choreography by Ian West (The Blues Brothers & The Play What I Wrote) Lighting is by Colin Grenfell (theatre award winner for Blackwatch) and sound by Luke Swaffield (The Curious Incident of the Dog in the Night).

When does The Full Monty run at Manchester Opera House?