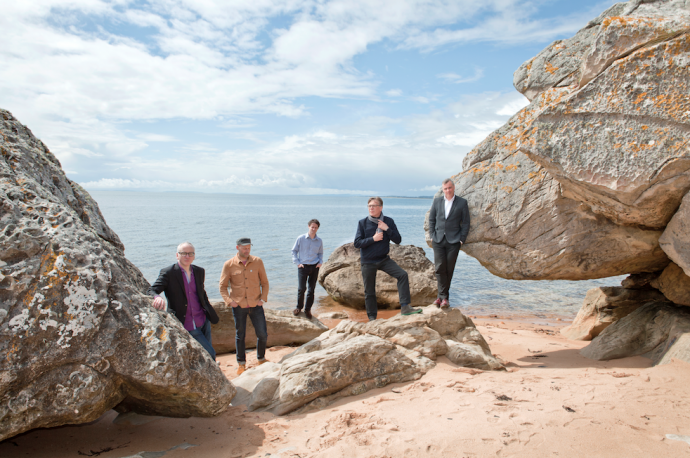 Six years used to be a lifetime in rock’n’roll. Kids driven by the urgency of youth form bonds, plug in, play gigs, find a label. Acclaim, exhaustion, over and out.

Teenage Fanclub’s early years were propelled by that kind of frantic energy (thankfully without the flame out). As outliers of the young sound of Scotland’s second wave, they released five albums in their first six years together. The foundations of their national treasure status were already laid.

Inevitably, as the years go on, time seems to stretch and things slow down. The tenth Teenage Fanclub LP – Here – arrives six years after the release of 2010’s hugely acclaimed Shadows.  Given the previous urgency about recording, the time between albums seems disproportionately long.

Gerard Love explains the timing: “I find that as you get older, everything expands. When you start out, the nucleus of the band is so tightly bound, you’re living in each other’s pockets. Later on, you move away from each other and then everything around you – distance and time – just expands. Life gets in the way.”

And the timespan was noted within the band too as Raymond McGinley comments, “It does actually feel like ages between records. Once you’re a certain way in, the way it works in my experience is once you’re taking a long time making it, you’re going to take a long time to get back out again.”

Norman Blake continues, “Shadows came after a five-year gap; this one is coming after a six-year gap. Getting back together to work, even after all these years, does feel a lot like coming home. Thinking about it now, we really should get together a bit more often.”

Here was recorded with the band’s soundman David Henderson alongside regular drummer Francis Macdonald and keyboard player Dave McGowan in three distinctly different environments (initially at Vega in rural Provence, then at Raymond’s home in Glasgow before mixing at Clouds Hill in the industrial heart of Hamburg).  Raymond McGinley explains, “We’ve been working together for a long time; we’ve probably used most of the studios in the UK over the years. We’re conscious of not repeating experiences that we’ve had before. For us, it’s about trying to get something new out of each place we go. If you’re always trying to make something original; it makes sense to go on a journey – a physical one – to try to make the record feel different.”

As ever, song wise the Fanclub present a textbook representation of democracy in action, the record offering four each by Blake, Love and McGinley.  Here is a collection of twelve songs about the only things that truly matter – life and love.  “Lyrically, I think it’s a coincidence that the songs hit on similar themes,” Raymond points out “We all write individually, there’s no formal discussion about what we’re writing. I always like to think anything’s possible when we make a new record but because of who we are and how we work, there’s always going to be a strong continuity.”

Norman: “Possibly the album seems like it’s all about life because we’re all surprised that we’re still here. Gerry’s not quite 50; both myself and Raymond are now. You do start to focus on mortality a bit more as you get older.”

Gerard: “I think in your twenties and thirties, you fear middle age; you fear becoming older. Maybe you can fight it and try to stay as an eternal teenager. I like to think that we play to our strengths, to our understanding of life. Folk music, blues, it’s not necessarily made by young people. A lot of music I find myself drawn to is made by people over 40 years old. It might not be on the cover of NME but it can still deliver a truth.”