Previewed: One Night In Miami at Home Manchester 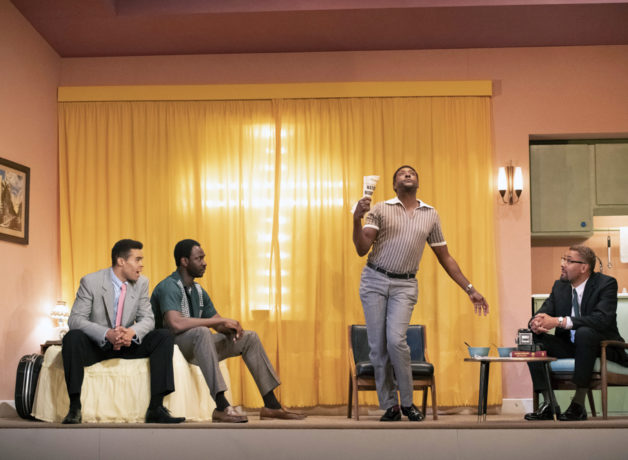 Home Manchester hosts a fictional account based on true events imagining what happened when Cassius Clay, Malcolm X, Jim Brown and Sam Cooke were in the same hotel room.

One Night In Miami is presented by Nottingham Playhouse Theatre Company by arrangement with ABKCO.  The production focuses on four friends, all on the cusp of becoming legends.

Kemp Powers’ One Night In Miami imagines what happened in that hotel room.  The tough-talking drama sees them having passionate arguments on race and power, sharing their dreams of a better life for all and teasing each other.

One Night In Miami is directed by Matthew Xia, known for his though-providing productions including Into The Woods and Frankenstein at Manchester’s Royal Exchange Theatre.  Speaking about the production, he commented, “One Night in Miami… lets us into that historic room where we get to see these icons as friends, as well as being allies in the civil rights movement. It explores the responsibilities that come with being a successful Black man in 1964 America – and how these conversations resonate today.

“The evening is full of laughter, bonhomie between brothers, and a fair bit of tension as they work out what the next steps are for the movement and how best to lift an entire people. And of course, there is some amazing music from the era, including Sam Cooke’s anthemic ‘A Change is Gonna Come.'”

Who stars in One Night In Miami at HOME Manchester?

Cassius Clay is played by Conor Glean; Malcolm X is played by Christopher Colquhoun, Miles Yekinni appears as Jim Brown and Matt Henry stars as Sam Cook.  Oseloka Obi and Andre Squire join the cast as two members of the Nation of Islam’s security troop, protecting the four men against the realities of the world outside the hotel room.

When does One Night In Miami run at HOME Manchester?