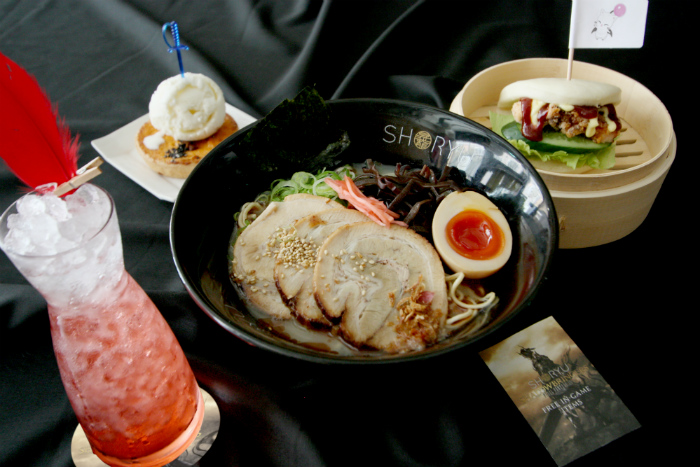 The new three course menu is available from 1 to 21 July, with the Japanese restaurant offering gamers in Manchester the opportunity to get their hands on exclusive in-game items.

Final Fantasy XIV Online players enjoying the set menu will receive a code to unlock the in-game items Buttery Mogbiscuit (x 10) and  Fat Choco Choco (x 10), bringing even more deliciousness into the world of Hydaelyn. By using one of these items, players will be granted a +4% experience bonus for 30 minutes.

So, what’s on the Final Fantasy menu at Shoryu Ramen in Manchester?

For starters, fans can choose from the extremely fluffy Moogle’s Favourite Buns with either a chicken or pumpkin filling. There’s also the option to try evil Ultros Takoyaki – a traditional Japanese battered octopus dish with a dark twist. Each dish will even come with their own Final Fantasy flags for fans to take away.

Moving through to the mains, customers can get to grips with the characters and scenarios of Final Fantasy XIV Online with dishes including the Meteor Survivor Ramen, also known as Shoryu’s much-loved White Natural Tofu Ramen. Other mains to choose from include the Miso Wafu Bahamut Ramen with Japanese fried chicken or the Signature Ganso Behemoth Ramen topped with BBQ pork belly.

Finally, visitors will be able to indulge their sweet tooth with desserts such as Paladin Mochi -traditional sticky Mochi ice cream balls with powerful flavour. Gaming fans can also try the unique Matcha flavoured Chocobo’s Gysahl Cheesecake and for those who prefer a savoury dish to finish, they can enjoy a Sweet Popoto Tart made with sweet potato and decorated with swords to prepare diners to head into battle!

After a hefty three courses, gaming fans can wash down their meal with a choice of three tasty drinks, Ishgardian Tea, a Milky Iced Hoji Cha tea, Red Mage, the traditional milky calpico soft drink with crushed fresh strawberries or the epic fire of the Phoenix Down cocktail! A legendary fan favourite and healing item in the acclaimed series.