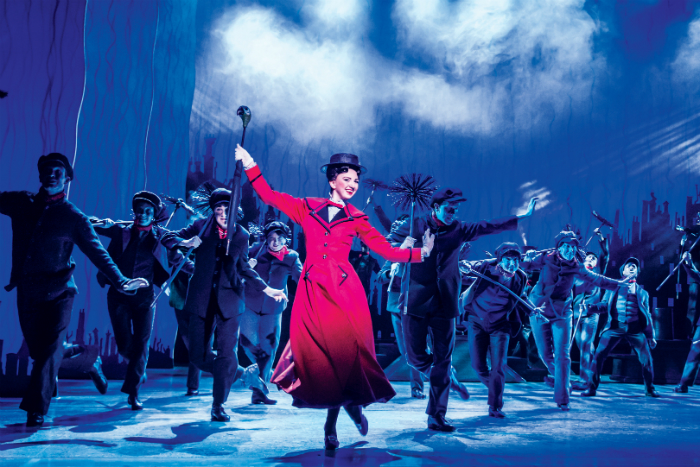 Mary Poppins is set to glide in to Manchester for a run of the multi award-winning musical which will be performed at Manchester’s Palace Theatre from 20 January until 5 March.

The magical story of the world’s favourite Nanny arriving on Cherry Tree Lane has been triumphantly and spectacularly brought to the stage with dazzling choreography, incredible effects and unforgettable songs. The stage version of Mary Poppins is brilliantly adapted from the wonderful stories by PL Travers and the beloved Walt Disney film.

The stage production of Mary Poppins is co-created by Cameron Mackintosh and has a book by Oscar-winning screenwriter and Downton Abbey creator, Julian Fellowes. It has a timeless score by Richard M Sherman and Robert B Sherman including the songs Jolly Holiday, Step in Time, Supercalifragilisticexpialidocious and Feed the Birds with new songs and additional music and lyrics by the Olivier award-winning British team of George Stiles and Anthony Drewe.

Zizi Strallen most recently starred as Lana in Matthew Bourne’s The Car Man. Her previous West End credits include: Cats; the multi award-winning Merrily We Roll Along; Rock of Ages; Dirty Dancing; Chitty Chitty Bang Bang and Matthew Bourne’s Cinderella at Sadler’s Wells.  She has also appeared in The Music Man at Chichester Festival Theatre and as Penny Pingleton in Hairspray at Leicester Curve.

Matt Lee, one of Australia’s premier “song and dance men”, played the role of Bert in Mary Poppins in the hugely successful Australian production of the show, his portrayal winning him the prestigious Helpmann Award for Best Actor in a Musical. His other theatre credits in Australia include Miss Saigon, The Witches of Eastwick, Rent, Grease and The Boy from Oz. Matt was also a permanent member of the judging panel for Australia’s So You Think You Can Dance.

Milo Twomey has most recently been seen in Twelfth Night at the Sheffield Crucible.  His other theatre credits include: Much Ado About Nothing at the Royal Exchange; Richard III at the Nottingham Playhouse; Dancing at Lughnasa at Royal & Derngate Northampton and Lady Windermere’s Fan at the Manchester Royal Exchange.

Rebecca Lock has most recently appeared as Rosie in Mamma Mia! at the Novello Theatre. Her other theatre credits include Oliver! at Sheffield Crucible; The Tempest at Theatre Royal Bath; The Phantom of The Opera at Her Majesty’s Theatre and Avenue Q at the Noel Coward Theatre.

Penelope Woodman’s recent theatre credits include: Sons of the Desert at the Royal Court Theatre Liverpool; the UK tour of Birds of a Feather; Mamma Mia! both at the Prince of Wales Theatre and on international tour, and the UK tour of Never Forget.

Wendy Ferguson most recently played the role of Madame Thenardier in Les Misérables at the Queens Theatre. Her other theatre credits include: Carlotta in The Phantom of The Opera both at Her Majesty’s Theatre and at the 25th Anniversary Concert at the Royal Albert Hall, and Widow Corney in Oliver! at Theatre Royal Drury Lane.

Grainne Renihan’s theatre credits include: Grizabella in Cats on UK Tour and in Hamburg; Fantine in Les Misérables at the Palace Theatre; Florence in Chess at the Prince Edward Theatre; Guilietta in Aspects of Love at the Prince of Wales Theatre; Ellen in Miss Saigon at the Theatre Royal Drury Lane and Mary Magdalene in the European tour of Jesus Christ Superstar.

Blair Anderson’s recent theatre credits include If the Lights Are Too Bright at the Ovalhouse Theatre; In Lambeth at the Southwark Playhouse, the Singapore tour of Seussical and the UK tour of Blockbuster The Musical.

The internationally renowned and multi award-winning creative team assembled for Mary Poppins is led by stage and film director Richard Eyre. Co-direction and Choreography is by Matthew Bourne, with Co-choreography by Stephen Mear.

Mary Poppins will be performed at Manchester’s Palace Theatre from 20 January until 5 March 2016.