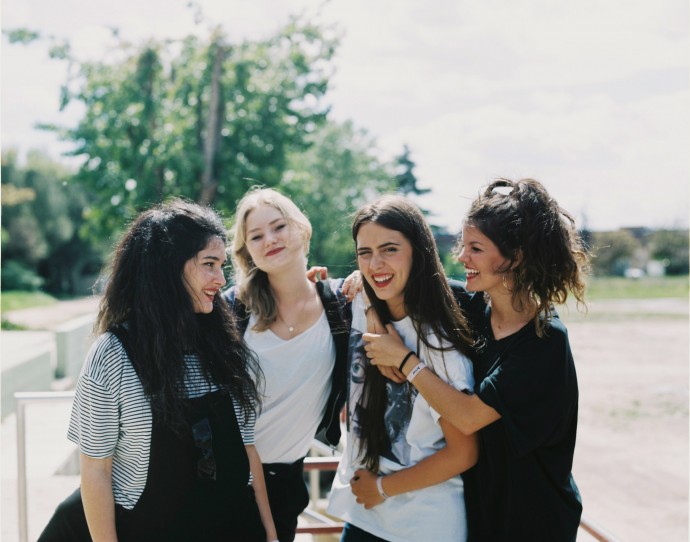 Spanish quartet Hinds will release their second album I Don’t Run on 6 April ahead of a run of UK dates including a Manchester gig at Gorilla.

Hinds – Carlotta Cosials, Ana Perrotte, Ade Martin and Amber Grimbergen – have work along with co-producer Gordon Raphael and engineer Shawn Everett in putting the album together.

Hinds’ breakout debut album Leave Me Alone may have been an album of party anthems drenched in metaphors, but with I Don’t Run, they explain that it’s time to cut right to the chase, avoiding happy, young and carefree songs “we’re not satisfied with that” explains guitarist and co-vocalist Ana Perrote, who continues “On this album the struggles are clear.  We want to be brave”.

The tour and album follow the release of their first single from the album, New For You with a video featuring guitarist and co-vocalist Cosials practically screaming “Sometimes I see myself and I can’t stand my show!” before a pining chorus that sees her promise to be her best self for a lover (or perhaps for herself, or even her band of sisters).

Speaking about the self-directed video which sees the band dominate the futbol field, Carlotta Cosials commented, “I thought it cannot be more Spanish (football) and that it cannot be more a male sport, and that it is good to present a different gender-reality without even trying hard. I think sports are such a good metaphor with life, with goals, passion and suffer.”

Where and when do Hinds perform in Manchester?

Hinds headline at Manchester’s Gorilla on 17 April 2018.  The Manchester gig is the second date of a run of five UK shows before the band perform across Europe.