Previewed: Heads Up at The Ruby Lounge 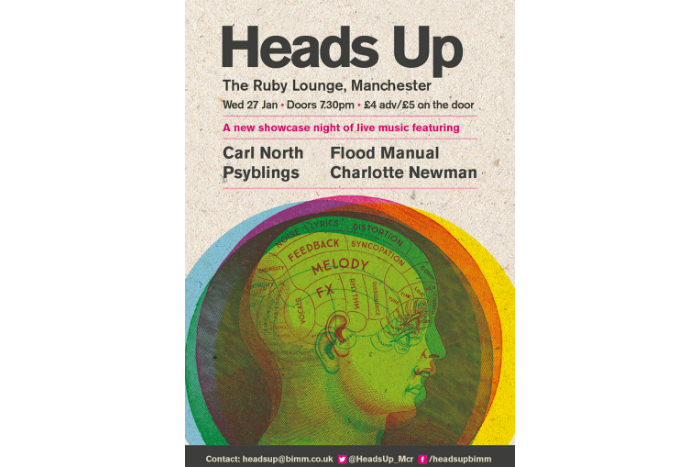 BIMM music school is set to host its debut gig night at The Ruby Lounge, the first of a monthly showcase of BIMM and BIMM-affiliated acts.  The event, being organised by students and tutors is set to become an entirely student run event, giving BIMM students the ideal opportunity to learn the live music trade both on and behind the stage.

So who is playing?  The first night will feature four acts: Carol North, Psyblings, Flood Manual and Charlotte Newman.

In keeping with the idea behind the event, BIMM students have been helping on the promotion and journalistic side of things, putting together bios for each of the acts.

From playing with the U.K. Subs during his early teens to becoming part of a signed band, Carl North has achieved more than most during the ten years he has immersed himself in music. But it is now, with three years of experience under his belt, that Carl has begun to establish himself as a singer songwriter in his own right, and more importantly, as a credible artist with a deep-rooted originality and natural flair.

Describing his unique sound as an “Anglo-Americana mix, with rhythm and blues and with lonesome country songs,” he delves amongst genres to create the jaunty, Chicago blues-esque sound that consistently gives a deserving nod to his influences Howlin’ Wolf, Muddy Waters and Bob Dylan. Carl puts his strength as a songsmith down to “writing an awful lot” and believing in what he sings. “If it’s not relatable or to some degree real, then I don’t see the point,” he says, succinctly.

Carl prides himself on wanting to make old Americana music relevant again and reinvent it for a new generation, arguing that he has no set audience for his music, simply stating that, “It should be for anyone and everyone.” With 2016 bringing an array of opportunities his way, Carl North looks set to pave his own way as a songwriter, musician and pioneer of rockabilly reinvention the modern world.

Cunningly-named from the sense of all being ‘siblings’ after living together as a band and referencing their psych stylings, Psyblings have described their sound as “psychedelic with a blues rock, punk and grunge influence”.

Despite only being a band for about 8 months, they’ve spent most of that time writing and have already self-released material and sold-out shows. Key influences include TY Segall and Tame Impala, as the latter’s Kevin Parker records and produces his own material, an approach the band enjoy.

When asked what Psybling’s future plans are, Jordan Lythgoe answers, “We’re currently writing and finishing new tracks and are hopefully going into the studio to record a single, plus B-side, professionally. At the moment we have just recorded a new demo track by ourselves and are currently in the process of mixing it.”

The five-piece have just sold-out their Warrington hometown show and, with lots of gigs coming up in the future (Liverpool and Leeds in February and more in March), Psyblings are quickly gaining ground.

Flood Manual. A fitting name for a band who radiate power and strength as they enter 2016 full of creativity, enthusiasm and plenty of determination to make their mark.

The self-proclaimed ‘Manchester Flannel based punks’ – formed of Louis Johnson, Lee Bond, Lucio Grey and Farrell Howarth – describe their sound as predominantly pop with a punk vibe, but play on their influences Radiohead and Mac DeMarco to create their vocal driven music and strong lyrics.

Their single, ‘With The Sunrise’, embodies the driven and passionate outlook of the band with it’s melodic vocals and tranquil undertone, filled with ever-changing dynamics. There’s the promise of songs and an album release during 2016, but the four-piece vow not take themselves too seriously, striking a careful balance of “making bad jokes” and “sometimes playing some songs”’..

Vocalist and guitarist, Louis Johnson admits that his personal goal would be for the band to release an album before he turns 21, an aspiration that seems more than achievable for a band who are rapidly working their way up.

Meet Charlotte Newman. At just 18, she is a talented multi-instrumentalist who can already play piano, acoustic and electric guitar, all of which she uses in her passionate music. 10 seconds in to any of Charlottes gentle pieces and you’ll be sucked into an angelic daze of gorgeous singing and heartfelt lyrics.

Newman’s been performing her music publicly for near 2 years now and enjoys every minute she’s on stage. “I find it easier to play on my own,” she replies, when asked about her preference for solo performance. “And I’m also self-sufficient.’’

It’s an all-too rare trait among upcoming artists, but one that will serve her well. Her influences include John Mayer, The Eagles, London Grammar and Wolf Alice. However, with Pink Floyd being her “all-time favourites’’, it should come as no surprise that Newman’s sound channels a spacious ambience, through to dreamy acoustic bliss.

Newman writes her own material, finding her inspiration in everyday life and experiences and crafting it into delicately laid out melodies and powerful vocals. With a lot of experience and talent under her belt, Charlotte Newman is s to give a great show at the Heads Up gig on January 27th.

Heads Up takes place at The Ruby Lounge on 27 January 2016.  Tickets priced £5 available via Ticketweb.