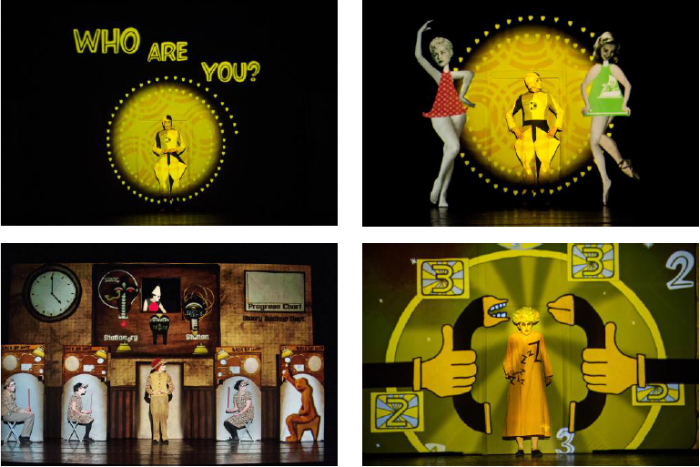 The performance follows a sold-out and extended run at Christmas at the Young Vic in London, following which it received a West End transfer to Trafalgar Studios and performances in Salzburg, Taiwan, Paris and Moscow.

1927 is a multi-award winning London-based performance company specialising in combining performance and live music with animation and film to create magical filmic performance. Founded in 2005 by Writer, Performer & Director Suzanne Andrade and Animator & Illustrator Paul Barritt, the company works across the performance fields of theatre, opera, music and film.

The visually arresting and satirical take on our misuse of technology features a mix of live performance and music as well as film and animation, following the life of the extraordinarily ordinary Robert Robertson, whose life is irrevocably disrupted when he buys a golem – a creature who will improve the efficiency of his daily affairs. But when Robert upgrades to superior model Golem 2, the show questions what happens when man is no longer in control of machine.

Funny, mischievous and eerily relevant to today’s technology-reliant society, Golem is directed and written by Manchester Metropolitan University drama graduate Suzanne Andrade, with film, animation and design by Paul Barritt – who jointly won Best Designer at the 2014 Critics’ Circle Theatre Awards for the production. Music is by Lillian Henley and associate direction and design is by Esme Appleton.

HOME’s Artistic Director: Theatre, Walter Meierjohann, is delighted to be welcoming 1927 to HOME. “1927 are one of the most ground-breaking companies which have emerged over the last years,” he says. They bring a totally original individual stylistic approach to Golem, and I am sure that our audiences will be captivated by the production.”

Home announces Autumn/Winter season
In Review: Sexual Perversity in Chicago by 1956 Theatre
In Review: Crocodiles at the Royal Exchange Theatre