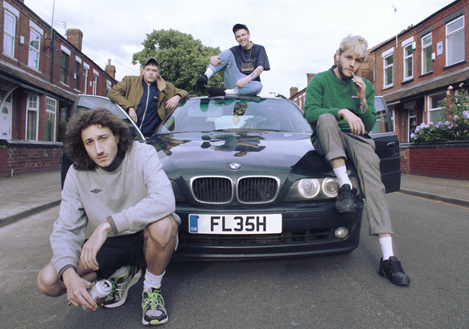 Manchester’s own Flesh are set to perform at Sound Control as part of their first headline tour in support of their new EP W8 4 ME’/Dead Lonely which is due to be released on 25 September.

The 11-date tour sees the foursome performing at Sound Control on 29 September before returning to headline This Feeling at Night N Day a few weeks later on 31 October.

‘W8 4 Me’ and ‘Dead Lonely’ were recorded in Flesh’s home studio in Fallowfield Manchester. The tracks showcase their snotty, smutty new wave Britpop with splashes of Madchester beats combined with cast-iron Heavy-Metal dual guitar solos more than ever before.

The past few months have seen Robbie, Haz, Cozza and Jon making waves across the UK with self-release NOT GNA hitting track of the day on the likes of This Feeling/GigsSlutz, Its All Indie and Electric Banana to receiving radio plays from John Kennedy’s XFM Xposure and featuring heavily on BBC Introducing in Manchester.  Flesh’s self-produced videos have reached 10k+views on YouTube on each release.

In Review: Jaws at Manchester Academy
In Review: Elevant at The Fallow Cafe
In Review: The Orielles at The Castle