Previewed: Finbar Furey at The Dancehouse 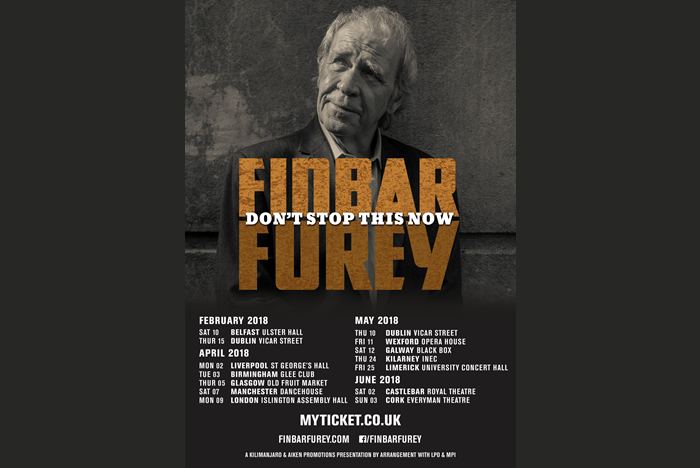 Irish folk legend Finbar Furey is set to perform at Manchester’s The Dancehouse during an intimate 14-date UK and Ireland tour – his first run of UK dates in more than 10 years.

Multi-instrumentalist, composer, songwriter, storyteller and actor Finbar Furey has left his mark on the music of Ireland for more than four decades as the lead singer and uilleann pipes player for the Fureys.  And after thirty years of touring the world with his brothers, introducing new audiences to the band’s music, Finbar launched in to a solo career to pursue a new life as a singer, writer and producers.

The artist who has always been at the forefront of musical change re-releases his latest album Paddy Deaf (which topped the Irish charts in 2017) for the tour, with new songs and a bonus live DVD of his performance at Vicar Street Dublin with the CD/DVD now repackaged as Don’t Stop Me Now.  The album package is due for release on 30 March via BMG.

Largely driven by his near-fatal heart attack the veteran Irish musician and storyteller found himself more creative than event, with an insatiable desire to write.  “ I couldn’t sleep.” he explains, “I’d be woken up by words and melodies every night. I had to get out of bed and write them down. It was a strange feeling; I felt driven, I felt so peaceful inside yet so driven and, since I barely survived the trip to heaven and back, I was different somehow. I was more inside my music and my confidence to write and to sing and play grew.”

His long career has also included film & TV appearances, including a singing role in the 2002 Martin Scorsese film Gangs of New York as well as the award-winning 2016 film The Wild Goose Lodge, for which he wrote and performed the music.

Fans can expect an intimate setting at these special shows, and to be treated to Finbar’s rare talents as he brings pure Irish music and humour to the stage. At the age of 71, this supreme musician is not for slowing down – on the upcoming tour Finbar commented: “Too late to stop now!”

When does Finbar Furey perform at The Dancehouse Manchester?