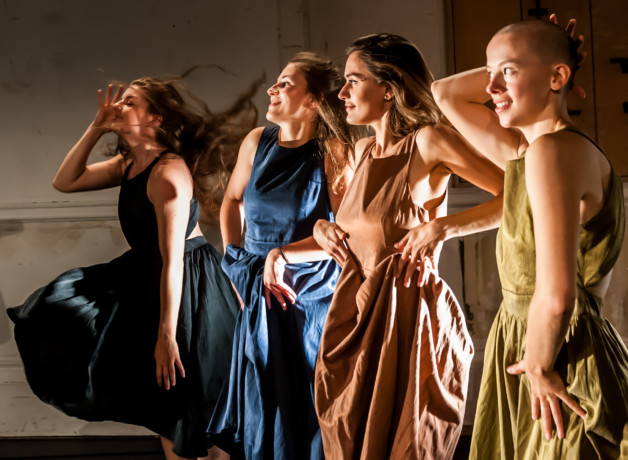 ThisEgg bring their Edinburgh Festival Fringe-First winner dressed. to HOME Manchester looking at trauma, and celebrating the healing power of clothes and friendship.

They will deliver five performances of the production with each one caption subtitled.

After being stripped at gunpoint in 2012, Lydia Higginson sought to redress herself by creating her entire wardrobe from scratch. In 2016, Lydia, a seamstress and costume designer, gave herself a year to make all her own clothes, after which she gave away all the clothes she had ever bought.

Friends since school, Josie Dale-Jones, a theatre-maker; Nobahar Mahdavi, a singer; Olivia Norris, a dancer; and Lydia Higginson, took this act of reclamation and self-liberation as the basis of dressed. to celebrate the power clothes have to define, liberate, hide and embellish.

dressed. is made in conjunction with Made My Wardrobe and premiered at the 2018 Edinburgh Festival Fringe.  It won a Scotsman Fringe First and is nominated for a 2020 Office in the Best Play/Musical/Other category.  ThisEgg were also nominated for Total Theatre Awards’ Emerging Company 2018.

The show has been created by four lifelong friends.  They use storytelling, music, dance, live sewing and clowning to turn a traumatic experience in to a show of beauty and resilience, a show about reclaiming one’s body, female friendship and the integrity of clothes to identity.

Speaking about the production, Josie Dale-Jones commented, “We started making dressed. in July 2017. In November 2017, the Harvey Weinstein allegations broke out. This changed both everything, and nothing; in the way we made the show, in what we were exploring, and in how we saw ourselves as women in the world. When #MeToo gained momentum though, it did feel like a rally cry, a howl back to keep going; amongst the wider movement for change, there was a need to hold on to personal journeys, for individual voices to be heard.”

Lydia Higginson added “When you devise theatre, you are trying to create a world that the audience can believe in. For the last decade, the three women I created dressed. with have been rebuilding my world into a place I can believe in. Last year we decided to create dressed. for women whose worlds have been shattered, and for all the friends who have helped rebuild them.”

When does dressed. run at HOME Manchester?