Previewed: Dawson Reigns and The Rising at Gullivers 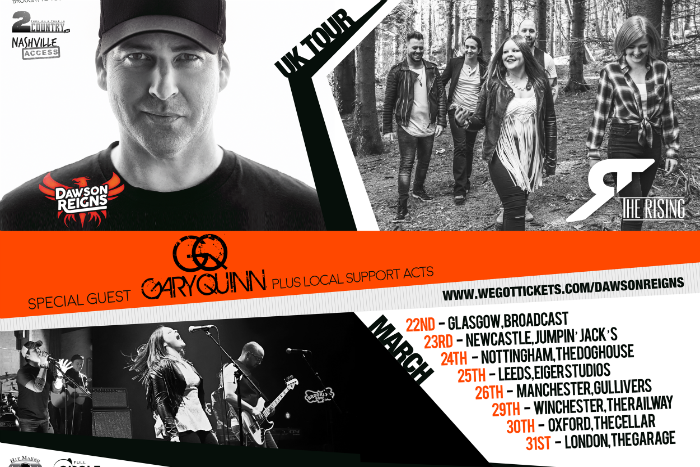 After the recent success of London’s Country2Country Festival and subsequent tours by the likes of Southern Halo, and announcements of upcoming Manchester gigs from Nashville heavyweights Miranda Lambert, Little Big Town, Maren Morris and Thomas Rhett there no doubt that country music has really broken in to the UK mainstream.  Add in highly successful albums from UK talents Ward Thomas and The Shires and it’s apparent that it’s not just American acts which are experiencing success.

This Sunday UK and American country meet at Manchester’s Gullivers as Belfast quintet The Rising and Nashville based singer/songwriter Dawson Reigns hold a co-headline tour.

Championed by Bob Harris, Baylen Leonard and radio station Chris Country, Nashville based singer/songwriter Dawson Reigns kickstarted his UK campaign last year with the rock-tinged infectious radio hit Love Way All You, which was co-penned by The Shires tour-mate Canaan Smith.  An eponymous EP and a brief UK tour in September alongside Holloway Road won him an army of fans.

Belfast based quintet The Rising launched their revamped line-up in 2016 (Chris Logan on guitars, banjo, mandolin; vocalist Chantelle McAteer; Brian Mellors on bass guitar; Shane Watters on drums; and Carla Crawford on piano, keys/synth) with the stunning Last First Love, which was released in September 2016. Having been holed up in studios in Belfast and Nashville, where they worked with Grammy winning engineers and producers including Hank Williams, for the majority of the year, the group are eager to share their new songs with audiences as they build towards their sophomore album, the follow up to 2014’s 10-track album Coming Home. With famous fans including Graham Norton, Gaby Roslin and Alex Lester, the group have opened for Ward Thomas, The Shires and Jess & The Bandits.

Dawson Reigns and The Rising perform at Manchester’s Sullivers on Sunday 26 March.