In Review: Jess and the Bandits at Gullivers 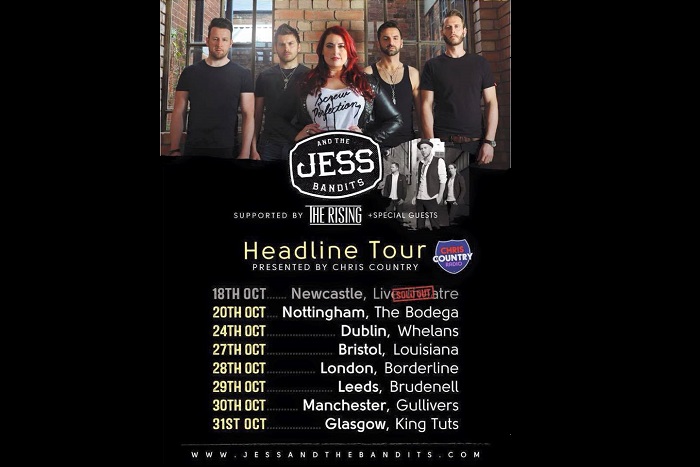 Speaking before the gig, Jess Clemmons, frontwoman of Jess and the Bandits, promises a gig filled with energy.  Within moments of coming on to the stage, she is proved correct as she and the Bandits launch in to a set which thrills the crowd.

But in truth, the energy and excellent performances start at the outset of the evening as country duo Luke and Mel open proceedings.  Performing tracks mostly from their self-titled EP, one which has seen them rightly garner significant support, their acoustic set is a hit.  Both play the guitar excellently, their voices perfectly complimenting each other with percussive elements added by Mel, stamping her boots and hitting her guitar.  They are a winning combination.  Their humour is also spot on as they interact with the crowd and each other.  Not just showcasing their own music, they perform a cover of Little Big Town’s Little White Church, which is a hit, before finishing off the set with their own Enjoy The Ride.  The crowd rightly voice their approval for the duo’s strong showing.

Also on the bill are Belfast’s The Rising.  The pop/rock country band waste no time in setting out their stall, performing an excellent set of upbeat country rock.  Driven and largely guitar based, they perform tracks from their debut album Coming Home as well as a couple of strong covers.  City By The Sea and Highway To The Lost And Found demonstrate their upbeat rock’n’roll style with Chris Logan’s guitar work especially impressive, whilst they slow things down for the emotive Break The Chains, during which vocalist Tristan Harris ekes out all the emotion possible.  They also excel with two covers, firstly Johnny Cash’s Folsom Prison Blues before throwing a slight curveball with a much slowed down, but stunning, cover of The Killers’ Mr Brightside, during which there is barely any percussion – it works a charm.   At the end of the set, completed with Still Coming Home To You, they leave the stage having impressed the eager crowd.

Moments before Jess Clemmons steps onto the stage, the Bandits are already there playing and revving up the atmosphere. As Jess joins them and they launch into Ready Set, her strong voice and the guitars signal that a great night of rock’n’roll and pop country is upon us.

There’s variety in the set as upbeat and up-tempo pieces such as Getting Into Something and My Name Is Trouble (for which the video recently won a reward) contrast beautifully with slower pieces, amongst them the dramatic Don’t You Know and the stunning What If, which showcases her vocals perfectly.  Variety can also be found in the feel of the tracks – from the country-rock/country-pop influences to the strong traditional country feel of You Can’t Stop Me and even the slight r’n’b influence of She Ain’t Me and soulful vocals of Single Tonight, not to mention blues hints in Rock Steady.

Throughout the performance, the crowd are delighted.  They cheer, sing, tap their feet and dance away.  And Jess is clearly enjoying herself too, laughing and joking, grinning throughout.  She playfully calls on the audience to take photographs as the two cooling fans stationed at the front of the stage in a tropically warm Gullivers, blow her hair in a style which wouldn’t be amiss in an ‘80s music video.

Jess’s excellent, strong vocals are matched by an equally impressive performance from the Bandits.  From Steve on keys and Dave on bass through to the excellent guitar work and riffs of Louis on My Name Is Trouble and the outstanding cover of Mama Told Me Not To Come. Despite the rising temperature level in the venue, drummer Ricci’s energy also abounds on tracks such as You Can’t Stop Me.  Jess and the Bandits are certainly on top form.

As the set finishes, it’s clear why Jess And The Bandits have been attracting such a large amount of publicity recently.  They are energetic, talented and have given an outstanding performance which will no doubt have their fans coming back for more.