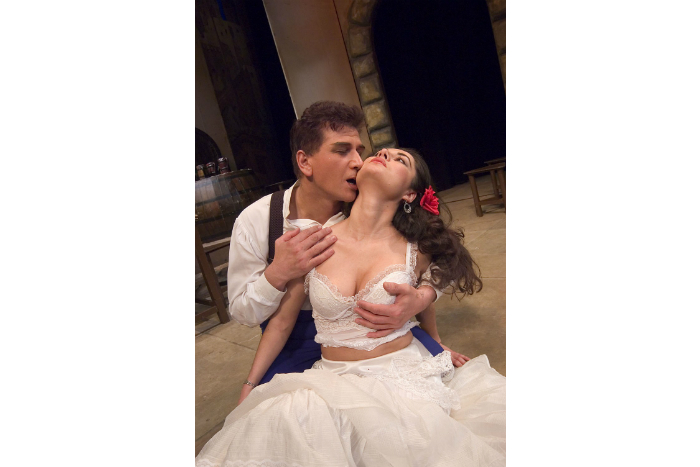 Carmen is the story of the bewitching gypsy girl whose tantalising beauty lures a soldier to desertion and leads to her own murder. Stunning international mezzo-soprano Zarui Vardanean who received critical acclaim for performances of Carmen in 2013 and Aida in 2014, together with Liza Kadelnik will sing the title role of Carmen.

The role of Michaela will be sang by Maria Tonina who returns after spectacular success in Traviata and Rigoletto and Alyona Kistenyova who gained rapturous reviews from her debut as Madama Butterfly earlier this year. Iurie Gisca returns to the role of Escamillo after playing to excellent reviews in 2013.

The opera includes some of the most evocative and best-loved melodies in opera – The Habanera, The Seguidilla, The Flower Song, The Chanson Bohème and perhaps the best-known baritone aria of all The Toreador’s Song. With a brand new set which reflects the stunning architecture of Seville and its main square with Roman and Moorish influences.

Carmen also features a spectacular dance sequence by Caspian the stallion, ridden by Joe Butcher from AB Films and the special guest star, a donkey. Ellen’s mother ran the Spanish equivalent of the RSPCA which saved the lives of many donkeys and to continue this good work Ellen has included a donkey from various sanctuaries to help them raise money.

Ellen has performed many exciting productions of Carmen in her 24 years of being an opera producer, from an outdoor performance in the beautiful grounds of Leeds Castle in Kent, to the visit to the Middle East in 2004 where she entertained the Emir of Qatar and 3,500 Royal guests for the first ever performance of Carmen to be performed in the Gulf, screened live on Al Jazeera Television.

Her productions are renowned for their high production values, stunning set designs which truly capture the architectural backdrop of each of the beautiful cityscapes, lavish costumes and incredible pyrotechnic displays and lighting effects which all combine to deliver an exceptional visual and musical masterpiece for audiences.

Carmen is performed at Manchester Opera House on Saturday 28 November.