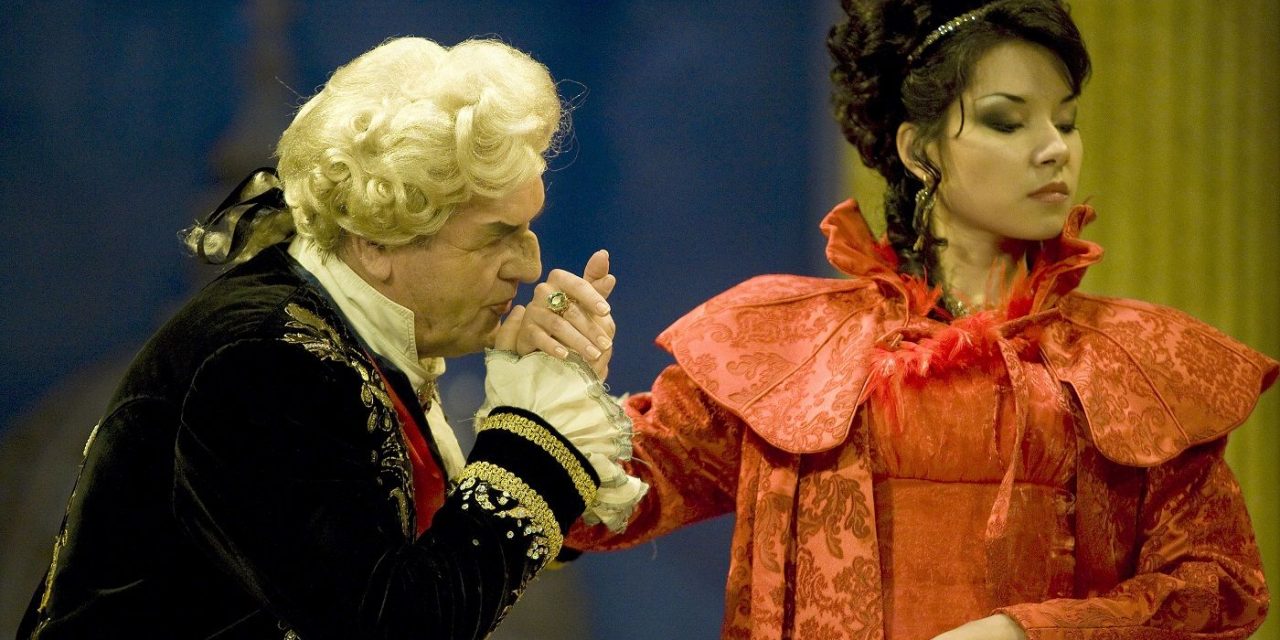 As the award-winning opera producer brings tours of Bizet’s Carmen and Puccini’s Tosca to Manchester, Ellen Kent gives her thoughts on opera production, touring and working with local stage schools:

YOU HAVE BEEN PRODUCING ACCLAIMED OPERAS FOR ALMOST 25 YEARS, THAT’S AN INCREDIBLE ACHIEVEMENT.

I had a hugely creative and colourful childhood which played a key role in shaping my life and artistic career.  I fell into opera by accident after being asked by Rochester City council in 1992 to provide a show for the Rochester festival held every summer at the castle.  As I was being funded by them for touring national children’s theatre from Europe in Britain, I suggested an opera and that is where the opera started for me.

In 1988, I was the first British producer to tour a foreign show on the British tour circuit – Bleu D’Ecailles or Why the Fish Left the River from The National Children’s Theatre in Lille, France.  Also Mowgli L’Enfant Loup with Judi Dench as the English narrator from the national Children’s Theatre, Strasburg. I like to think that I am a pioneer – not by intention but by accident! I enjoy a challenge and I do deliver, I always try to be cutting edge – the drama, the music, and the passion. And I’ve never looked back. To date, we’ve entertained audiences of over five million, which is incredible.

YOUR SHOWS ARE OFTEN SEEN AS A FANTASTIC INTRODUCTION FOR NEWCOMERS TO OPERA. SO WHAT CAN SOMEONE COMING TO THEIR FIRST OPERA EXPECT FROM AN ELLEN KENT PRODUCTION?

I have a long relationship with Moldova, Romania, Russia, Ukraine and Latvia and I cherry-pick the performers and orchestra to ensure we have the very best for each opera. Some of the crew have been with us since we did our very first productions in Moldova almost 20 years ago.

Audiences will have an experience they will never forget as my operas really are spectacular. It is my mission to produce people-friendly operas and give audiences a truly memorable performance.

I am a very visual person, so I’m involved in every stage from the creative process through to production – everything from the set design to costumes. We dress and treat each opera completely individually so I make sure everything we do has the Ellen Kent treatment. We are having an exquisite new set made for this tour of Carmen, Tosca and Die Fledermaus. It is based on an amphitheatre with Roman architecture, pillars and statues – it’s going to be a real highlight of the new tour.

I like my operas to look like a series of incredible paintings – colourful and beautiful. And beauty brings emotion. I love lighting as it can really change a set and the mood. So audiences see a lot of chandeliers in our operas. The most amazing feeling for me is when we create the ‘gasp factor’ and the audience have been known to clap the set before the action starts! Rather than descends into involuntary clapping. That’s what makes it all worthwhile.

We take things to the absolute maximum to create the ultimate opera experience – my wish list is never small and I take things as far as my creative brain or purse will let me. In the past, we’ve had a fountain from Calcutta with dancing coloured jets which also been used in Bollywood films. The audience sat with their mouths open in amazement so it had the desired effect!

HOW DO YOU CHOOSE THE COMBINATION OF OPERAS FOR A NEW TOUR?

It’s a bit of a science. I have extensive records about each opera we have already toured and I refer to this background when we’re doing our research. We work very closely with the Welsh National Opera and the other National opera companies to ensure we don’t clash with the shows we are touring.

THIS TOUR FEATURES OVER 90 DATES AT VENUES ACROSS THE COUNTRY, WHICH AMOUNTS TO THOUSANDS OF MILES ON THE ROAD. HOW DO YOU PREPARE FOR SUCH A BIG TOUR?

After almost 25 years producing operas, we have a blueprint to prepare for a big tour, plus I am such an attention-to-detail kind of person. We’ve become masters of touring and got it down to a fine art.

There is always room for improvement, and we strive to give audiences the very best show possible. That’s why live performance is so important, you have the opportunity to see, hear and feel the audience’s reaction. You’ve got to keep things fresh so the audiences return. There are no golden rules – but I’m sure Verdi and Puccini would have loved how we present their operas.

THIS TOUR FEATURES CASPIAN, A WHITE STALLION HORSE, IN CARMEN AND ALSO A GUEST DONKEY. WHY IS IT IMPORTANT FOR YOU TO INCLUDE THE ANIMALS IN YOUR PRODUCTIONS?

I was born in India and was aged 12 when our family [Ellen, her Mother and Father] moved to Spain. It was in Spain where my Mother first rescued two cats. This continued and she set up an animal sanctuary, going on to care for 40 donkeys, 40 cats and 40 dogs.

I like to care for animals just like my Mother. I’ll rescue anything given half a chance. So if we can include animals in the shows I can. Including the donkeys helps to raise their profile for much needed charities which rescue donkeys.

Audiences will thoroughly enjoy seeing Caspian. He is such a beautiful horse, very disciplined. He is a trained film horse so he can dance, it’s a magnificent sight.

YOU HAVE STAGED PERFORMANCES IN STUNNING LOCATIONS AROUND THE WORLD, WHAT STANDS OUT THE MOST? AND WHERE WOULD BE TOP OF YOUR LIST TO STAGE A PRODUCTION AND WHAT WOULD IT BE?

My experience in Qatar was amazing, when the Emir of Qatar built a theatre in a hotel especially to stage the opera. We were treated like Royalty, it was unbelievable. A real highlight was staging Nabucco in the grounds of Rochester Castle, this was where it all really started for me and opera – it was a life-changing moment. My dream has always been to stage Aida in Egypt on the banks of the River Nile.

YOU’RE OFTEN SINGLED OUT FOR YOUR DARING AND INVENTIVE APPROACH TO OPERA – THE TIMES HAS DUBBED YOURS THE LAS VEGAS OF OPERA. WHAT DRIVES YOU?

You just have to go for it in life, make the absolute most of it. My parents were exactly the same. No matter what problems you face, you overcome them. You can achieve anything if you believe in it 100% – and apply that to everything in life. I’ve faced a lot of challenges in life – but I want to achieve and never want to fail.

My Father is originally from Liverpool and his young life included serving people on a market stall when he was just aged 12. He educated himself, joined the Army and was stationed to India with the military band. He rose up through the ranks and went on to become the High Commissioner in India.

My Mother produced amateur opera in Bombay (Mumbai), so I began performing aged six. I started as an actress, singing and dancing, an all-rounder. I stayed at home in India and only learned to read and write when I was 8-years-old. I learnt to read mysteriously on my mother’s Angelique and the King collection in India! I did not go to school, until later at the age of twelve went to boarding school in Cromer, Norfolk.  I am positive that together with my parents’ influences, this has played a major part in choosing a creative path to follow.

My work is very special as it also gives me the opportunity to work with my daughter Juliet during tour preparation. Juliet is a documentary film maker and film producer, and was the casting director for The Only Way Is Essex and produced the Tougher Places for the BBC. So all very different from opera. She casts the wider ensemble that plays a major part in the production.

HOW IMPORTANT IS IT THAT YOU WORK WITH LOCAL STAGE SCHOOLS – WHAT DO THE YOUNG PEOPLE GAIN FROM IT?

This is absolutely vital and is at the backbone of what we do. This partnership is a huge opportunity for the young performers and they love it and fully embrace the challenge. They play a very important role and I enjoy seeing how they grow in confidence during their performances.

FINAL MESSAGE TO FANS OF YOUR SHOWS?

I am very grateful to the loyal audiences who have been enjoying Ellen Kent operas for almost 25 years, without their incredible support we just couldn’t do it. We look forward to seeing you again on tour – and we are looking forward to introduce people to opera for the very first time.