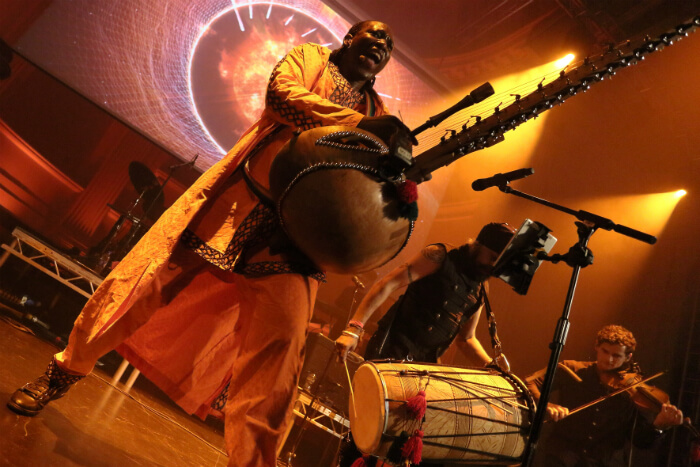 With album sales now topping one and a half million and two Grammy nominations to date, Afro Celt Sound System celebrated their 20th Anniversary in 2016 with acclaimed album, The Source.  The ground-breaking collective are now back with their eight studio album, Flight, accompanied by a major UK tour.

Flight explores the themes of migration, featuring musicians from around the world.  The Grammy-nominated group invited three other collectives to join them on the album.  The album features the Amani Choir, whose music director Emmanuela Yogolelo came to England from the Democratic Republic of Congo and has a refugee background; as well as Stone Flowers, the band supported by Music Action International, a charity transforming lives affect by war, torture and armed conflict; and the Johannesburg based African Gospel Singers.

The political album shines a spotlight on migration with a particular focus on refugees.  It draws on Armagh-born vocalist and flautist Rioghnach Connolly and Emmanuela’s work with the refugee community of Manchester and north-west of England.  It also looks at the environment, inspired party by a shared passion for bird-watching.

Formed by Grammy-nominated musician and record producer Simon Emmerson, Afro Celt Sound System are a European and African based collective who have forged a reputation for their energetic, uplifting shows.  Winners of the Songlines 2017 Best Group award, they combine folk traditions of different cultures in a unique and innovative way.

For the live shows, founder, Simon Emmerson is joined by long-term members’ vocalist, kora and balafon player N’Faly Kouyaté and Dhol drummer Johnny Kalsi, and features contributions from a host of other outstanding musicians including Armagh-born vocalist and flautist Rioghnach Connolly and bodhrán player and percussionist Robbie Harris. Amongst a host of other musicians, members of the Amani Choir joins them in Manchester and London and for the first time the band are joined by members of a Manchester-based refugee choir, drawn on ACSS’s Ríoghnach Connolly’s extensive work with the refugee community.