Paris Youth Foundation to headline launch of One Great Podcast 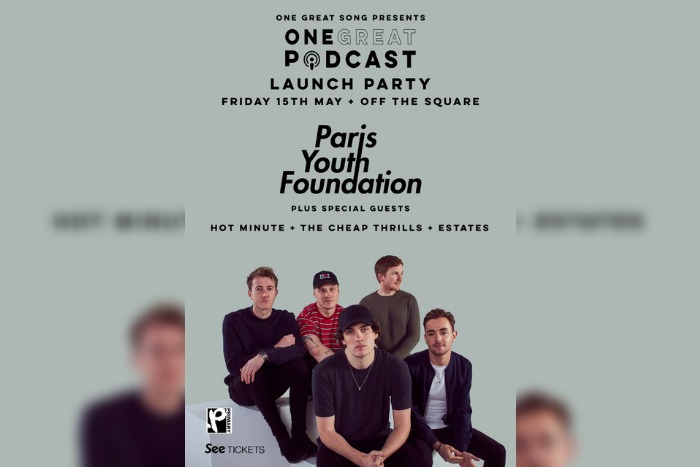 Paris Youth Foundation have been announced to headline the launch of One Great Podcast, a new show from the taste-maker blog One Great Song.

The show marks a return to Manchester for Paris Youth Foundation who will perform at the event at Off The Square in May.

The show celebrates the airing of One Great Song’s first episode of the brand new podcast, which goes live online on the same day.  The evening will feature live music from some of their favourite upcoming Northern artists.  Also performing are Hot Minute, The Cheap Thrills and Estates.

Paris Youth Foundation have recently released new single Home Is Where The Heart Is, receiving radio play from BBC 6 Music and Radio X.  The track is the band’s first release since signing to Modern Sky UK and was recorded at the legendary Parr Street Studios in Liverpool.

Speaking about the track, Paris Youth Foundation frontman Kevin Potter said, “Home Is Where The Heart Is is very much a love song at its core. It’s about that rare time in breakup, where you kind of don’t want to be sad or argue anymore. You just want to appreciate the time and the memories for what they were. It’s about that person being home for the weekend and how a place and a person can take you back in time, and maybe just for one night you pretend you’re still the same kids who fell in love all that time ago.”

When is the launch event for One Great Podcast?