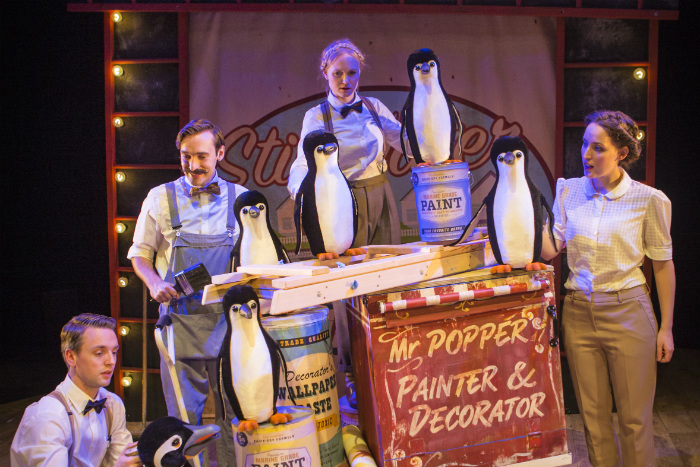 The hit musical Mr Popper’s Penguins is coming to Waterside in Sale this Christmas for frost-filled, festive fun for the whole family.

Mr Popper’s Penguins is presented by acclaimed children’s theatre company Pins & Needles.  It will run at Waterside for five weeks.

Painter and Decorator by day, Mr Popper spends his time dreaming of Antarctic Adventures. He is astounded when one day a packing crate arrives on his doorstep – and out of which waddles a penguin…

Speaking about Mr Popper’s Penguins coming to Waterside, Darren Adams, manager of the arts centre commented, “We are so thrilled to welcome back Pins & Needles to Waterside after two hugely successful and record breaking years which saw unprecedented sales and responses to their stunning and charming productions of Father Christmas and The Bear. This year, we are delighted that their internationally acclaimed Mr Popper’s Penguins is making its way back to the UK after a successful New York run on Broadway and right on to our stage for the first time to thrill and delight our audiences.”

When does Mr Popper’s Penguins run at Waterside?

Mr Popper’s Penguins runs at Waterside from Tuesday 26 November until 31 December 2019.  The show is recommended for children aged between 3 and 11.  Children (and adults too!) are invited to come in their PJs and bring a favourite bedtime teddy to the 6pm Slumber Shows to make their theatre experience a real bedtime treat!