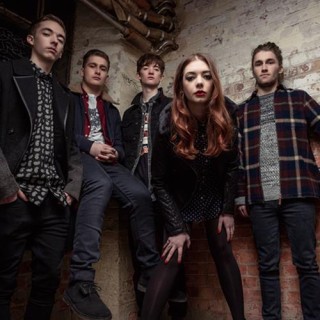 Yorkshire rockers Marmozets are set to return to Manchester’s Deaf Institute as co-headliners on the Big Cheese UK Tour alongside Lonely The Brave with support from psychedelic grunge rock quintet Allusondrugs.

Marmozets and Lonely The Brave are undoubtedly two of the hottest up-and-coming bands and have been picked to co-headline the thirteen date tour.

Marmozets were formed in 2011 and have been quick to pick up support, with the likes of Kerrang!, Zane Lowe and Q Magazine singing their praises.  It wasn’t long before they were performing at Reading and Leeds, Download and Slam Dunk before being voted Best British Newcommer at the 2013 Kerrang! Awards and Best New UK Band by Big Cheese Magazine.

2014 saw them with their own headline tour of the UK, in which they put on a stunning set at the Deaf Institute in April, before performing at Glastonbury and joining up with the Vans Warped Tour 2014 throughout the US.  With raucous performances and outstanding tracks which are full of energy and drive they are sure to lift the roof.

The five-piece band consists of Becca Macintyre (vocals), Sam Macintyre (guitar/vocals), Jack Bottomley (guitar), Will Bottomley (bass/vocals) and Josh Macintyre (drums) and commented “After Warped Tour in the US we’re unbelievably excited to be back touring in the UK with the excellent Lonely The Brave and our friends Allusondrugs. They’re both great bands and this is not a tour you want to miss! It’s gonna be loud, heavy and chaotic. Can’t wait for everyone to hear the tracks from the new album.See you there!”

Lonely The Brave have had the rock press buzzing for a while too and made it on to the Radio 1 Daytime Play List, having been formed four years ago, and mixing powerful rock riffs with stunning vocals.  The live shows have seen them pick up an ever growing fanbase. Commenting on the tour, Mo from Lonely The Brave is “Absolutely stoked to be on this tour with a band that we’ve been fans of for ages. Can’t wait to share a stage with them every night.”

The tour will commence at The Deaf Institute on Wednesday 1st October before taking in another twelve dates throughout the UK.

Tickets for The Big Cheese Tour headlined by Marmozets and Lonely The Brave at The Deaf Institute on 1st October 2014 go on sale at 9am on Wednesday 30 July priced at £9.

In Review: Fall Out Boy and The Pretty Reckless at the Phones4uArena