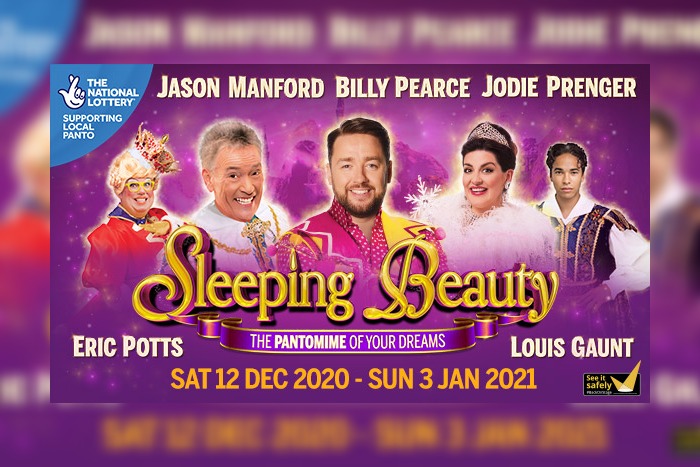 Manchester Opera House will host a run of the pantomime Sleeping Beauty as it reopens for Christmas.

And all tickets for the first performance will be gifted to NHS workers and their families.

Speaking about the production and giving tickets to NHS workers and their families, Sheen Wrigley, Theatre Director of Manchester Palace and Opera House said, “We are thrilled at the prospect of working with Qdos Pantomimes and re-opening the historic Manchester Opera House with this festive family show. It’s especially important that we can play our part in keeping one of the city’s great Christmas traditions alive after what has been an especially challenging time for communities in Greater Manchester. Our wonderful NHS staff can enter a ballot for free tickets for their families at healthservicediscounts.com, our way of saying a huge ‘Thank You’ for everything they’ve done this year.

“The support of The National Lottery has enabled us to bring some light and joy to the people of our city and to support some of our fantastic Palace & Opera House team as they return to work on this special show.”

To ensure the safety of staff and visitors, Manchester Opera House is putting a series of steps in place.  The venue has announced that they will be keeping in line with the current government guidelines and adapting to any changes the government make.  Customers will be able to book for a bubble of up to six with each bubble being separated by a combination of empty rows or empty seats to ensure they are a safe distance from other patrons, reducing the venue’s capacity by 50%. Staggered arrival times and one way systems will be in place with sanitising stations placed around the venue and deep cleaning taking place between every performance. Instead of queuing for refreshments, guests will be encouraged to stay in their seats by the removal of the interval and the added ability to order drinks directly to their seats. Backstage will have a Covid Monitor, employed to keep the cast safe and socially distanced, implementing precautions such as choreographed stage exits and contact-free performing for the actors, with rehearsals limited to just essential cast and creatives for each scene being rehearsed.

Making his pantomine debut in Sleeping Beauty is Salford-born comedian Jason Manford as Muddles alongside Blackpool’s Jodie Prenger as The Enchantress.  Joining them for the first time in Manchester after a 21-year panto stint at Bradford’s the Alhambra Theatre, is Billy Pearce as King Billy with Eric Potts as The Queen, Jenny Gaynor as Carabosse, Louis Gaunt as The Prince and Sarah Goggin as Princess Beauty who has recently starred in the UK Tour of Friendsical the Musical, the spoof of the hit TV show, as Monica. Previously she played Sister Mary Roberts in UK tour of Sister Act and has appeared in the past three QDOS pantomimes the Alhambra Theatre, Bradford alongside Billy Pearce.

When does Sleeping Beauty run at Manchester Opera House?

Sleeping Beauty runs at Manchester Opera House from 12 December 2020 until 3 January 2021.  Tickets are available now.  NHS workers just need to head to healthservicediscounts.com and register for the ballot.