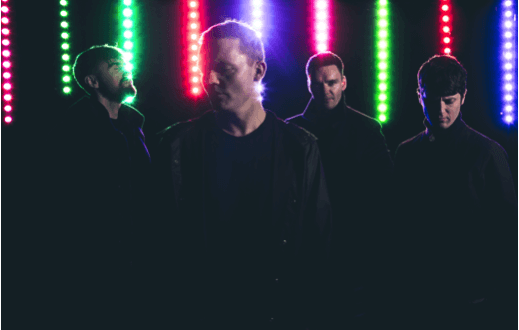 Manchester’s indie-electro four piece The Slower Readers Club play a sold out home-town gig at Manchester Cathedral on Friday as they released their upcoming album Build A Tower.

The new album, due for release on 4 May via Modern Sky, was preceded by latest single You Opened Up My Heart, atmospheric electro pop featuring an anthemic chorus, broody vocals and sweeping synths.  Also featured on the album are previous releases Lunatic and Through The Shadows.

Speaking about You Opened Up My Heart, singer Aaron Starkie commented, “You Opened Up My Heart is a hopeful song for uncertain times.  A lot of our songs are existential and angst ridden but in an age where we’re faced with stuff like Trump and Brexit, and people are becoming more polarised, it felt right to offer something with a more positive message. It’s about a basic belief that humanity and compassion will win the day, wrapped in an indie-pop love song”.

Build A Tower, The Slow Readers Club’s third album, was recorded close to home at Edwin Street Recording Studios in Bury.  It is their first release with Modern Sky, following independently released albums The Slower Readers Club (2011) and Cavalcade (2015).

The Slow Readers Club are now in the midst of a huge UK headline tour which saw them sell out their Manchester gig at Manchester Cathedral in under 24 hours.

The Slow Readers Club are Aaron Starkie (vocals), Kurtis Starkie (guitar and vocals), James Ryan (bass) and David Whitworth (drums), and have drawn comparisons with Interpol, The Killers and The National, building up a loyal fanbase from extensive touring, culminating recently with sold out shows including Manchester’s 2000 capacity Albert Hall, as well as The Garage and The Borderline in London.

When do The Slower Readers Club headline at Manchester Cathedral?

The Slower Readers Club headline at Manchester Cathedral on 4 May 2018.  The Manchester gig coincides with the release of their new album Build A Tower.