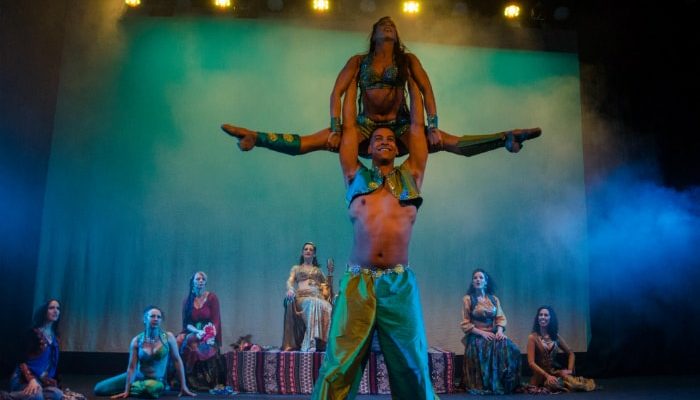 Manchester born and raised dancer Wade Lewin returns from the West End to appear in a new production of Scheherazade and 1001 Nights at Waterside in Sale.

The dancer, who is currently enjoying a career on the West End and beyond, attended Stretford Grammar School and spent five years with the Trafford Youth Dance Theatre, where he trained before a stint with Manchester disco show Love Train convinced him to pursue a career on stage.

Wade moved to London and quickly won a part in the massive West End hit The Lion King.  Millions around the world then saw him as a dancer in the Olympics opening ceremony, and as a Nefarious Inferi in Harry Potter and the Half-Blood Prince.  He has recently finished filming alongside Will Smith in Disney’s Aladdin.

He is now returning to Manchester to perform in Company of Dreams’ touring production of Scheherazade and 1001 Nights.  The show recently sold out two nights at Sadler’s Wells and is, he says, like nothing he has done before.  “This show is so unique and so thrilling” he explains. “The storyline is really dramatic – people actually gasped out loud when we did it in London, and the dancing is amazing. I can’t wait for everyone to see it.”

What is Scheherazade and 1001 Nights about?

Scheherazade and 1001 Nights tells the story of the brave and resourceful Scheherazade.  She tells stories such as Sinbad, Ali Baba and Aladdin to a vengeful king in order to save the lives of the women of the land.  The stories have since gone on to captivate people around the world for centuries.

Scheherazade and 1001 Nights uses fire artistry, illusions and lifts, combined with a fusion of dance styles and music.

When does Scheherazade and 1001 Nights run at Waterside Sale?

Scheherazade and 1001 Nights is performed at Waterside Sale on 29 April.